Not a month has passed since Monday, 14 October 2019, yet in the politically topsy-turvy times we live in the UK at the moment, it feels like a lifetime ago. It was the day of the most recent Queen’s Speech. Now that there is a general election taking place in December, one wonders what was the whole point of unlawfully proroguing Parliament then starting a new and very short session.

Whenever a new parliamentary session starts, there is a State Opening of Parliament, in which the Queen travels between Buckingham Palace and Westminster in the Diamond Jubilee State Coach to deliver her speech in the House of Lords. The monarch will have to repeat the trip again soon, when a new government is formed after the poll.

State Openings are a ceremonial occasion, and I do like witnessing a bit of pomp, so on that rather grey day I went first to Green Park to see the King’s Troop, Royal Horse Artillery fire a 41-gun salute, then to The Mall to see the Queen return to Buckingham Palace from Westminster.

First, the two Household Cavalry regiments, the Life Guards and the Blues and Royals, were on Constitution Hill, and moving towards Buckingham Palace. While I am no military historian, I believe it is fair to say that prior to the advent of powerful, long-range, and accurate firearms such as machine guns and mechanization of infantry, cavalry often played a decisive role in battles. They still look pretty intimidating. The Life Guards, photographed above, wear red tunics, while the Blues and Royals wear blue tunics.

Perhaps this is odd, but I like the sound of hooves hitting the road in a rhythmical clatter, as it is almost soothing.

As the cavalry regiments went towards Buckingham Palace and The Mall, the band started to play in Green Park.

Soon thereafter the King’s Troop arrived, with plenty of jangle. Six field guns pulled by six horses each arrived and they were positioned very quickly. This and other videos in this article were recorded using my smartphone and they are not the best quality, but I hope they convey the sight, sound, and atmosphere of the occasion. 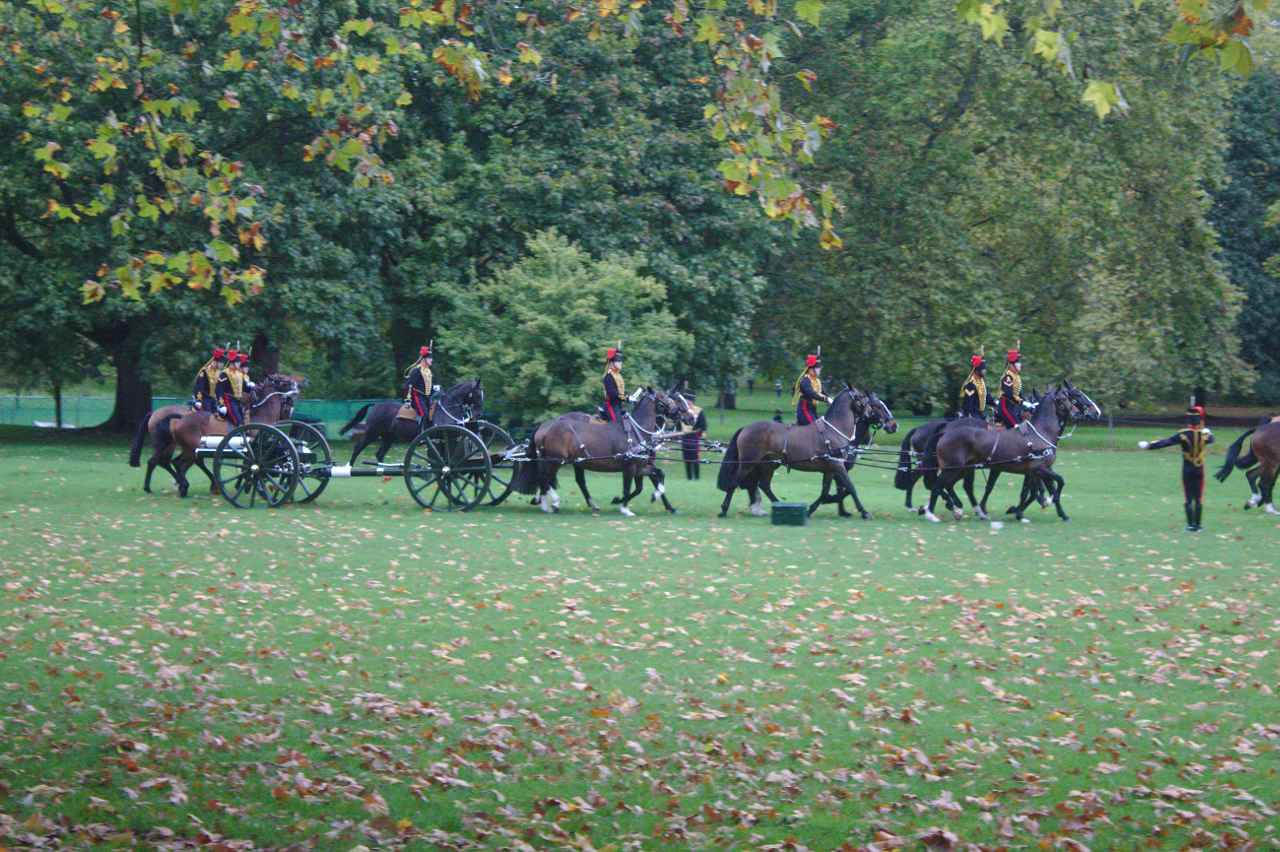 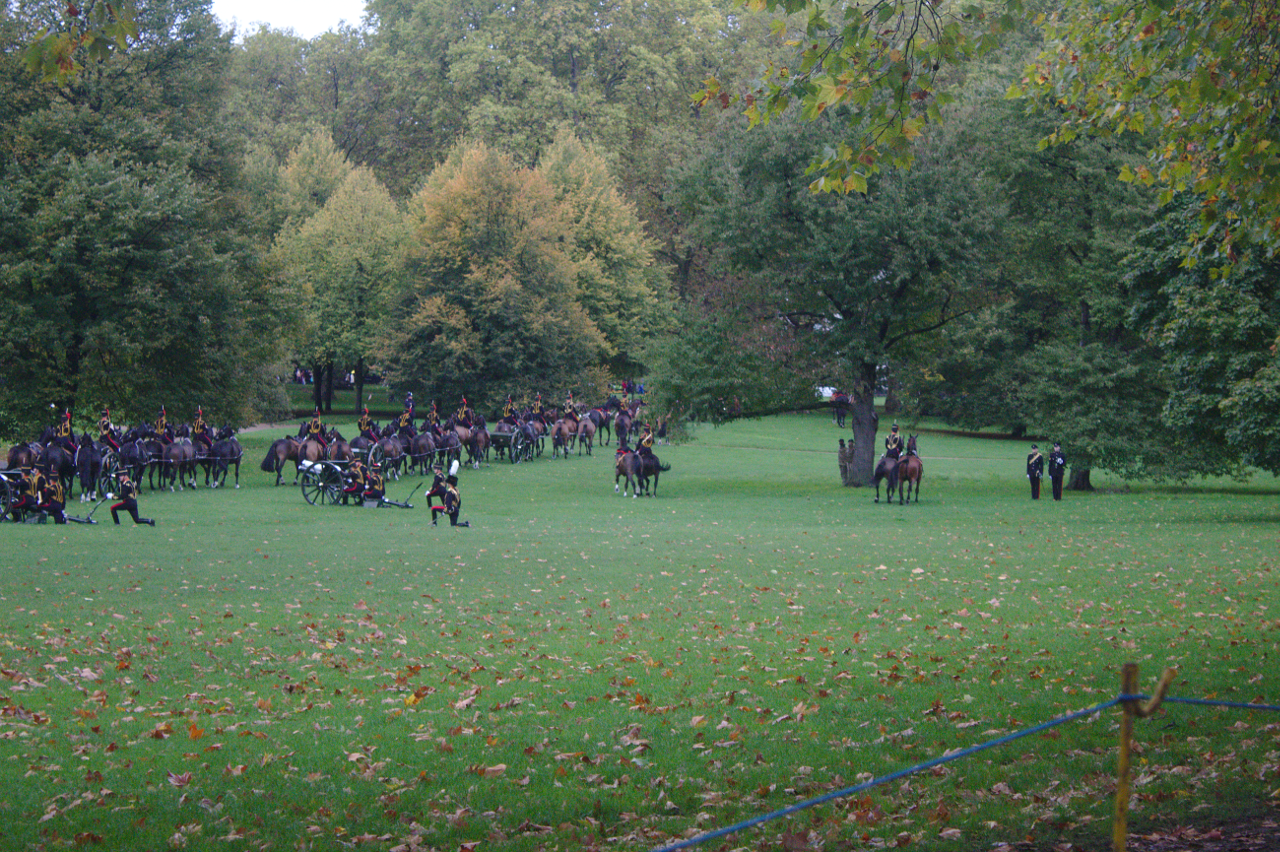 At the appointed time, the six guns, starting from number one at the extreme right and just about visible, fired 41 times in 10-second intervals. The orders to FIRE! are clearly audible. 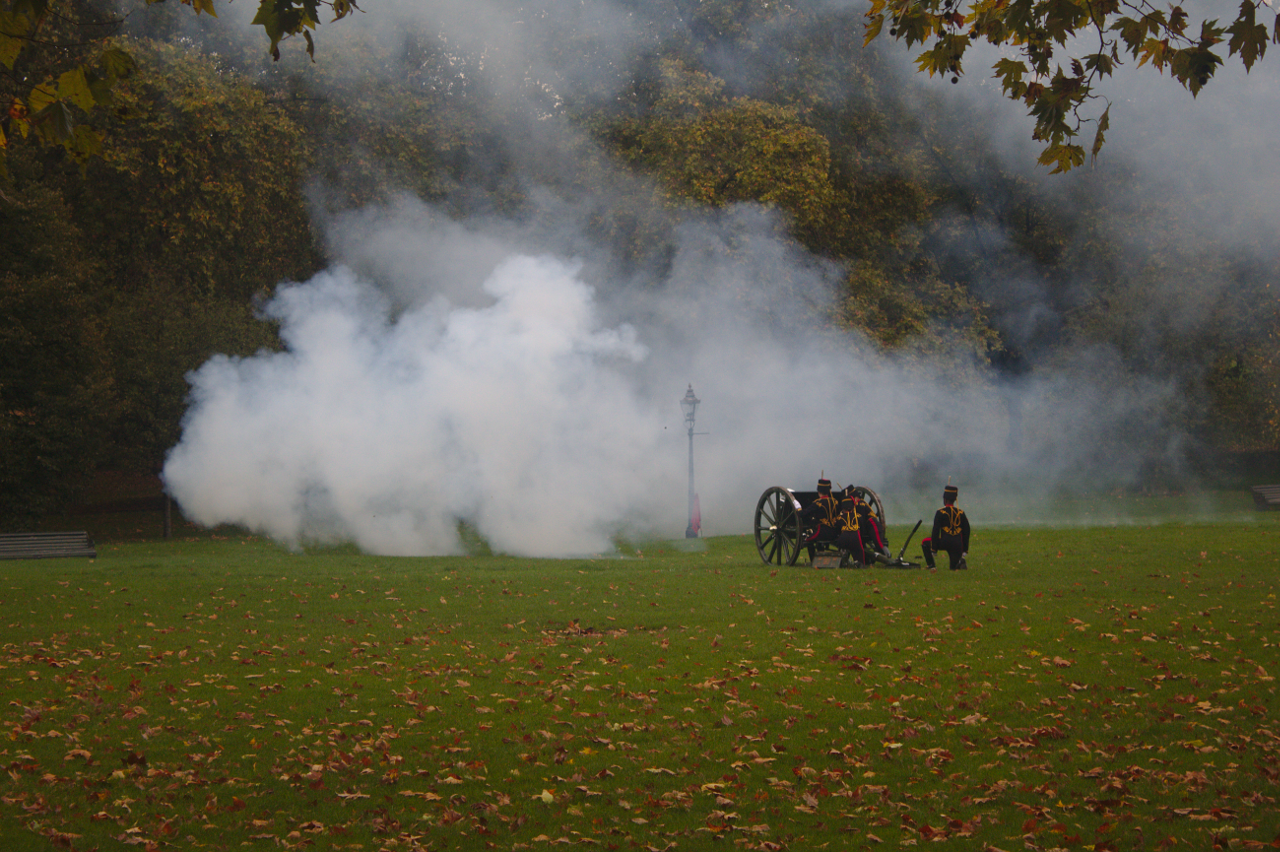 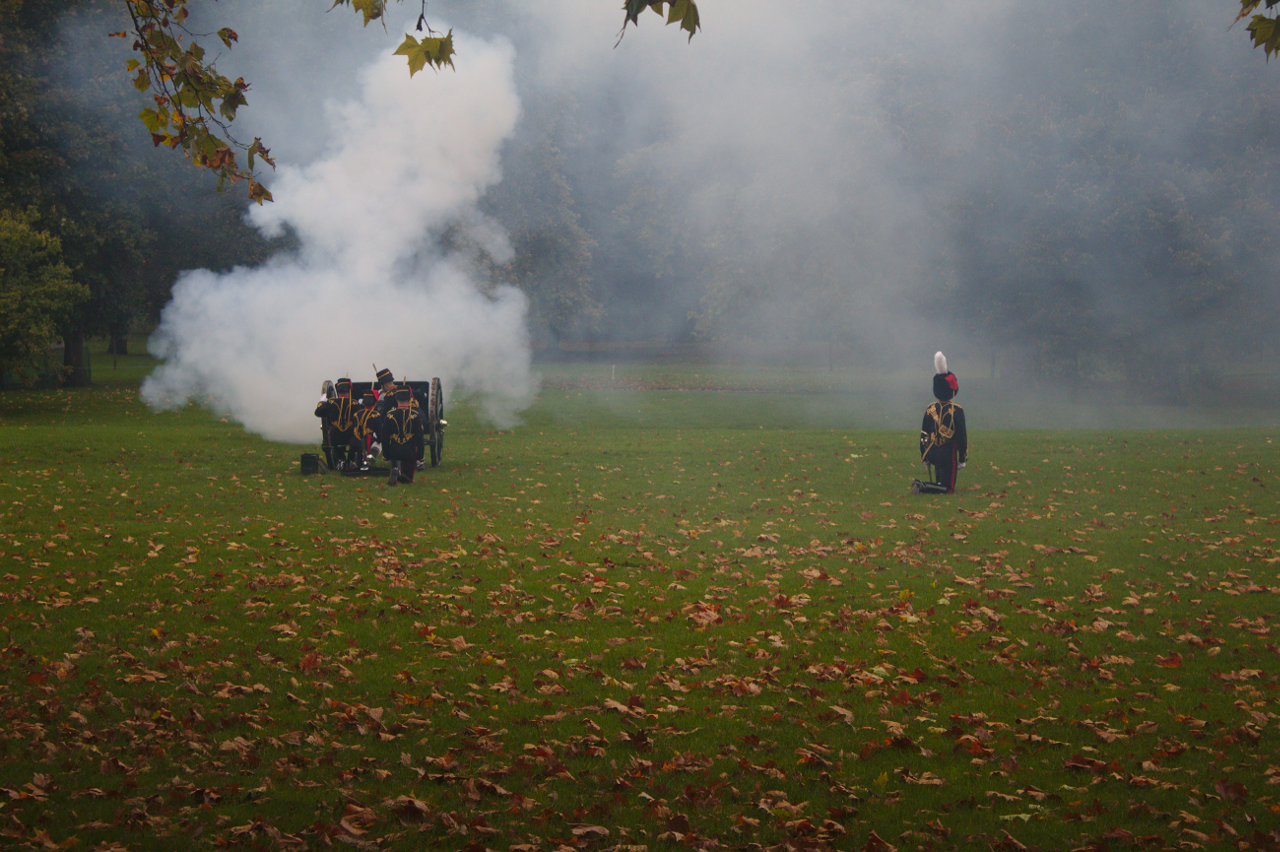 As soon as the salute was over, the horses came to pick up the guns. Some horses were jumpier than others.

As the King’s Troop left Green Park, I made my way to The Mall. While there was a large crowd on The Mall when the Queen left Buckingham Palce for Westminster, there were fewer people waiting for her return from Westminster. One way to distinguish the different regiments of Foot Guards is to look at the buttons on their uniform. In the pictures below, the buttons are evenly spaced and not in groups, and that indicates that they are Grenadier Guards. 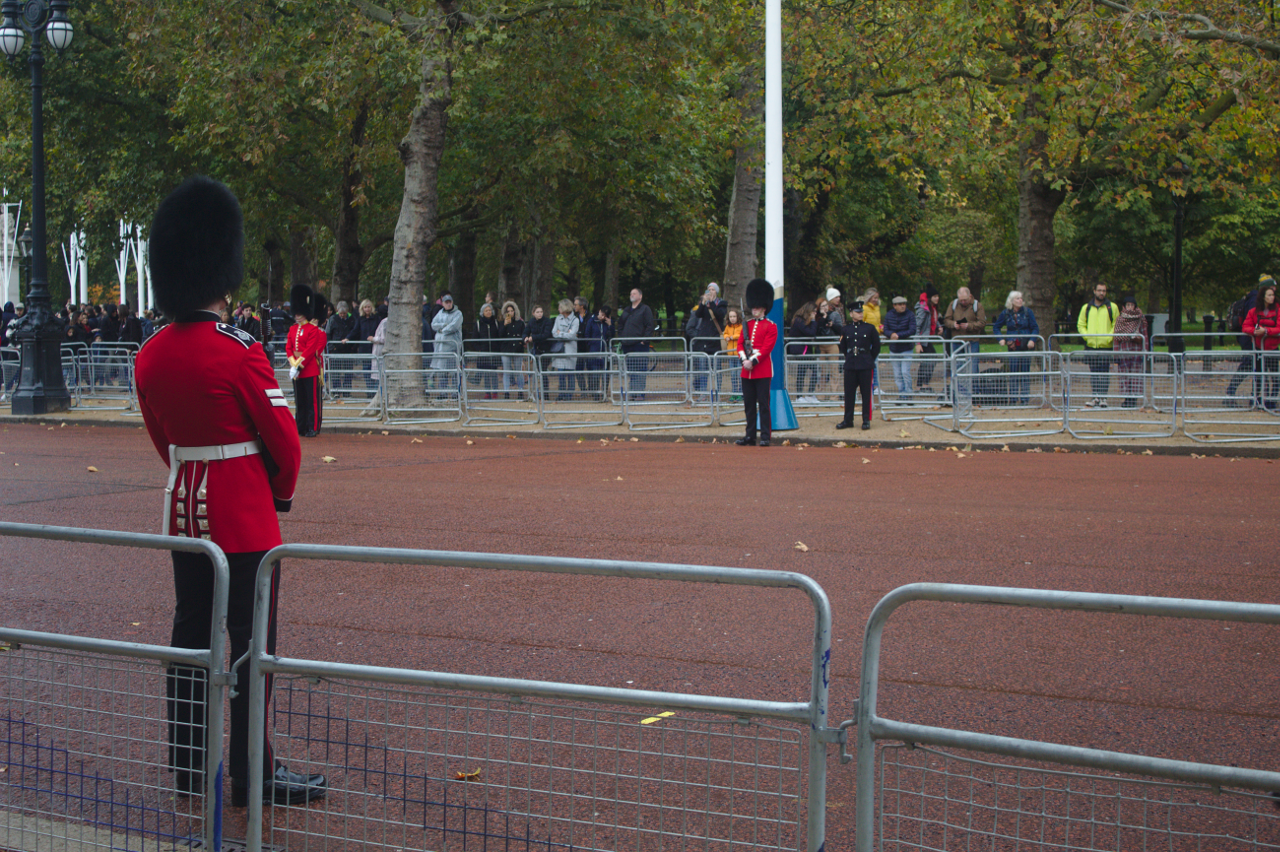 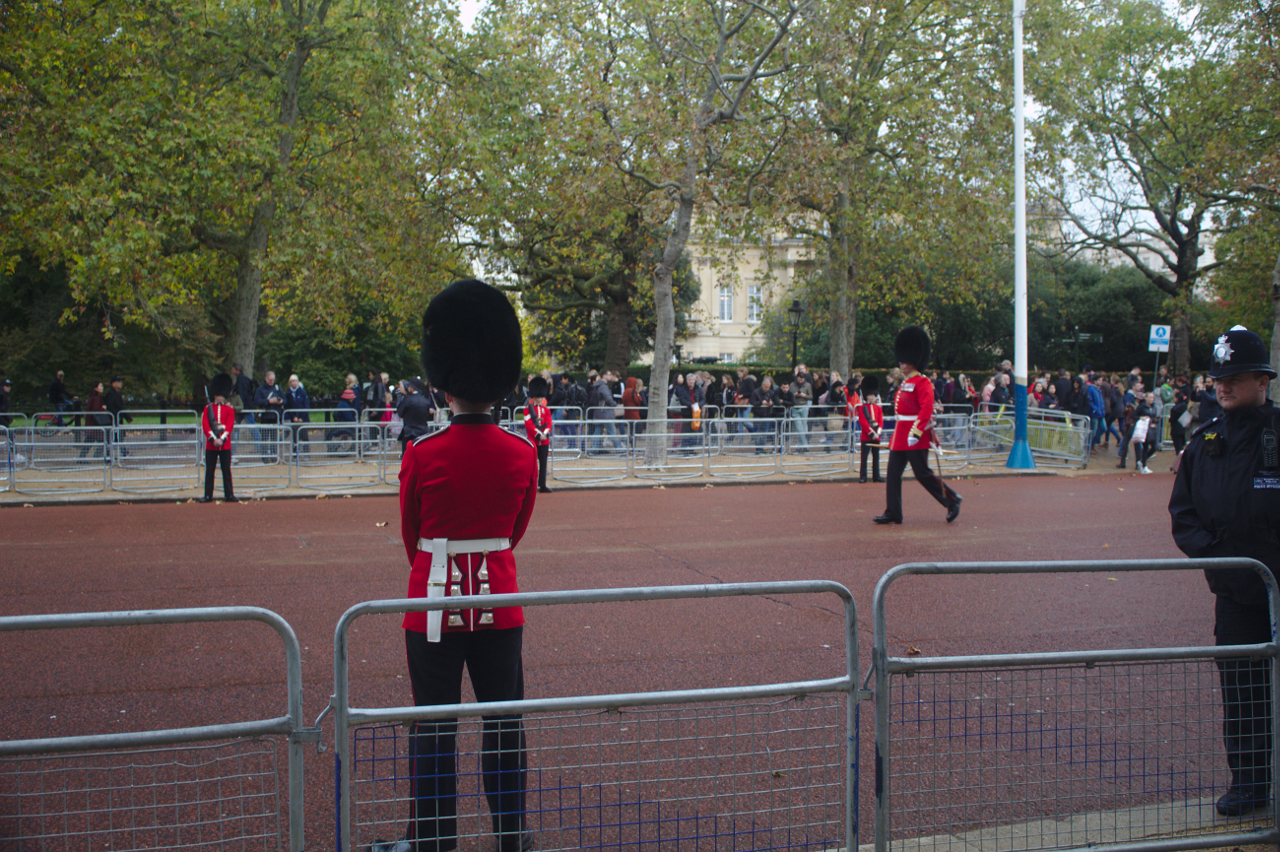 This photograph below was taken after the Queen returned to Buckingham Palace so it is out of chronological order, but it clearly shows the buttons on the uniform.

After finishing her speech, the Queen returned to Buckingham Palace in the Diamond Jubilee State Coach, escorted by the Household Cavalry regiments. 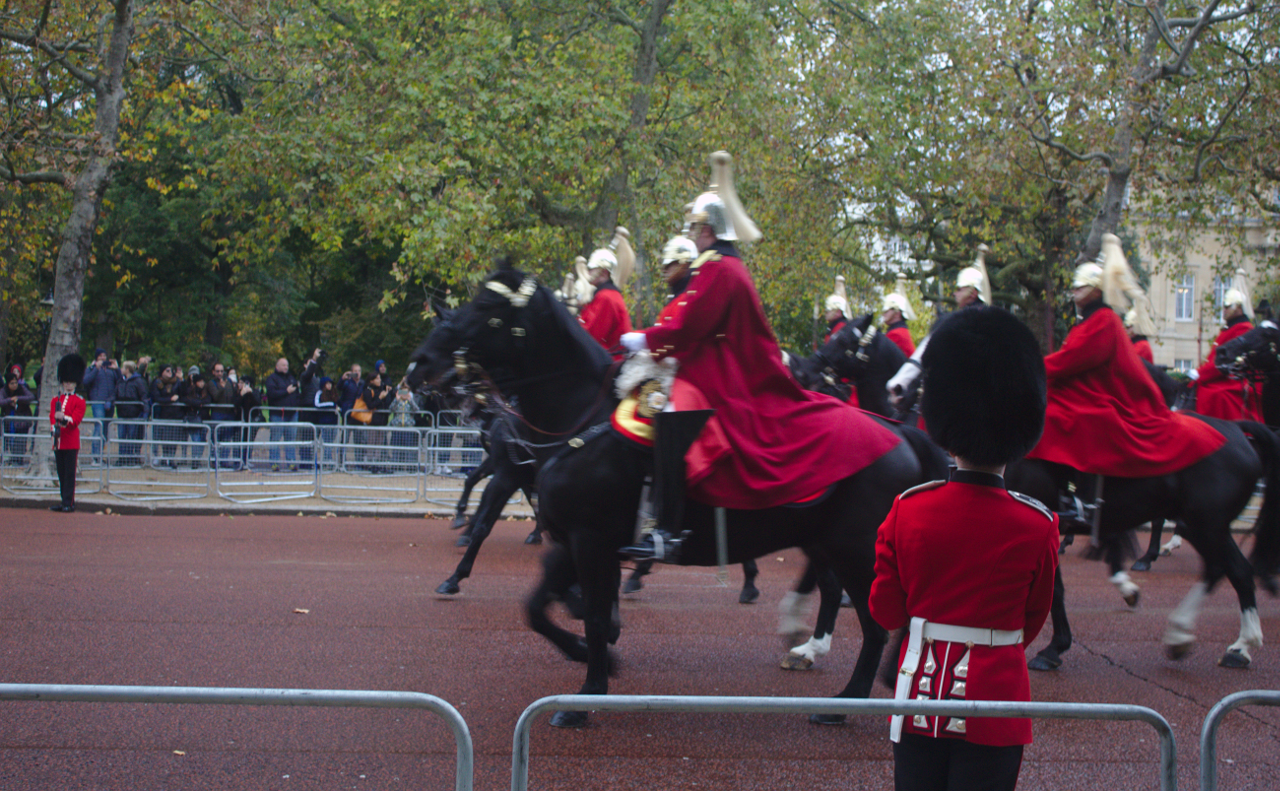 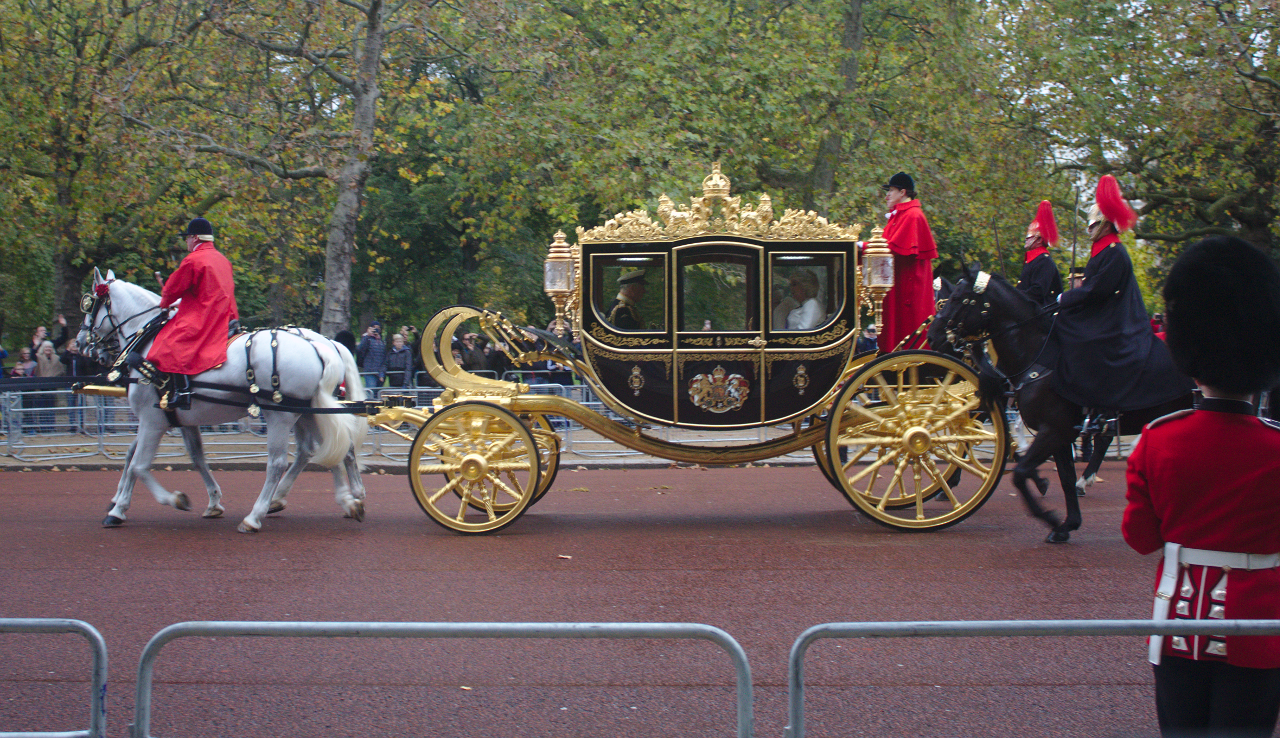 The regalia, including the Imperial State Crown, travel in their own coaches.