I originally read about this story on the Times website. The footage here swear words and references to recreational drugs (whose use would be illegal in many countries). In his drunken rant, a newspaper reporter admitted to plagiarism and resigned from the papers he writes for, complete with the f-word and two fingers.

Had he actually ‘cut and pasted’ when he filed his report to the Birmingham Mail? Well, I was curious to find out but I could only locate a cached web page (see picture below): the Birmingham Mail seems to have taken the original page off-line. There may have been articles written by Mr Adam Smith / Steve Zacharanda and printed but I have no way of obtaining a hard copy. 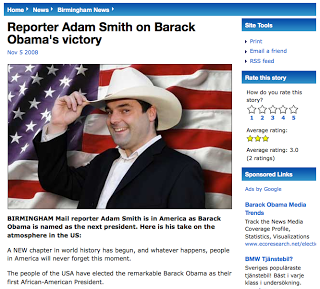 After searching a number of phrases in his piece using Google and other search engines, there seems to be no in verbatim plagiarism. It was probably a drunken boast: just pop into any pub any day and you hear men (and some women) boasting about some dodgy things they (supposedly) did, except that usually remains in the pub and does not end up on YouTube to be seen by a large number of people. Somehow silly things sound so much cleverer when you’re drunk. It is probably not newsworthy at all, but it does raise a number of questions about how ‘serious’ journalists ought to behave and whether we should trust whatever is written in the papers by drunkards (I don’t).

He sobered up the day after, and denies ‘cut and paste’ operation in this clip.

It remains to be seen if he has resigned or has been fired.