With hindsight, and over a week after the event, which is an eternity in political terms, it is always to easy to point out the flaws of the election campaign of the vanquished party, and I have to wonder whether Labour had chosen the wrong economic narrative for the election. The Conservatives repeated that rather ominously Soviet-style slogan the long-term economic plan ad infinitum, which however was a clear big narrative that people could understand and make a judgement on. Did people believe that the country was on the right course under David Cameron, and the job needed finishing as Mr Cameron had argued? Evidently many people did, or at least more people found it more convincing than the Labour narrative, except of course in Scotland where the SNP narrative – the weight of the economic narrative may be arguable – blew away the competition.

What was Labour’s economic narrative? It was unclear, and it was not big or bold enough: in its manifesto, Labour committed itself to achieving a surplus in current budget thus reduce the deficit, a fiscal policies such as ending the non-dom rules, and also ending exploitative zero-hours contracts. Many people might agree with these individually, but where’s the narrative that holds them together? Fiscally, Labour was sandwiched between the Conservatives (as well as UKIP and the Liberal Democrats) on the one side, and the progressive parties of the SNP, Plaid Cymru, and the Greens on the other side. Labour’s position was painted as fiscally irresponsible by one side, and austerity light by the other side.

At some point in the run-up to the election campaign proper, Labour seemed to have opted for zero-hours contracts as the cornerstone for its big economic narrative. It is probably fair to say that Labour was not going to win in the fiscal responsibility beauty contest, as the sharp questioning by the Question Time audience demonstrated: the last Labour administration has damaged the party’s reputation too much in this respect. It had to come up with an economic narrative big and cohesive enough, as well as credible and convincing enough, without being too threatening to alarm businesses, in order to show that it stood on the side of a large number of people in Britain. It had to be something that symbolized the economic and social injustice and unfairness, something that demonstrated the phoniness of economic recovery that people have not felt in their own circumstances, something that people can relate to and project their own experiences. And that something was going to be zero-hours contracts.

Relying solely on Google Trends would not be a sensible political strategy and I would not advocate such, but perhaps one alternative economic narrative that Labour could have chosen was living wage, which was mentioned in the section of the Labour manifesto alongside zero-hours contracts and minimum wage. The graph below plots how many times term cost of living (cost of living crisis did not generate enough data), living wage, and zero hours contract were searched on Google between May 2010 and May 2015 (the data for May 2015 are incomplete: the screenshot was taken on 14 May 2015). 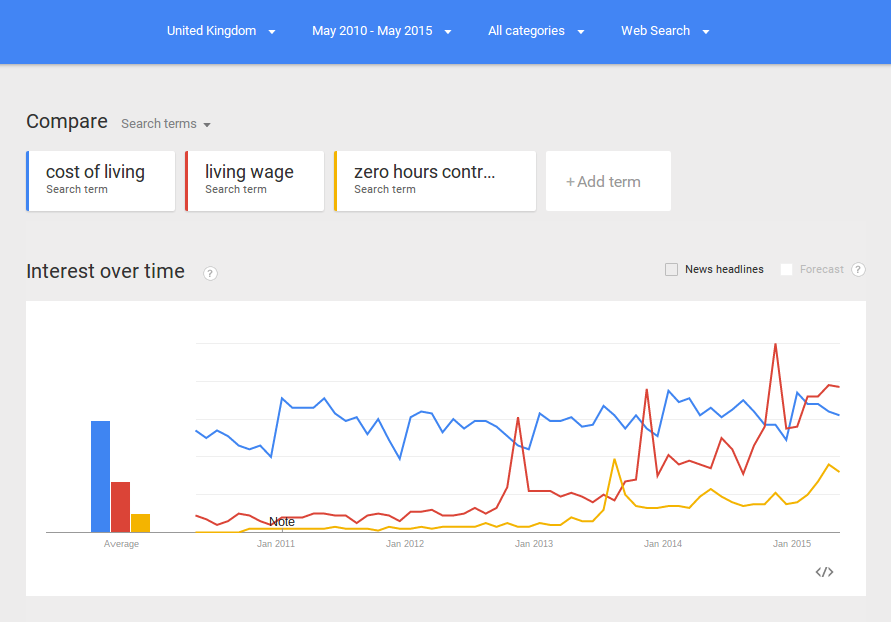 While there is a noticeable rise in the searches for zero hours contract in April and May 2015 as the election campaign progressed, it is interesting to note the steady rise of living wage over a prolonged period of time, and relative to the other two search terms. Arguing for and creating conditions for businesses to pay their employees a living wage without necessarily setting it the statutory minimum wage may have been a broader narrative in which zero-hours contracts formed part, and that could have encompassed and found resonance with more people, at the same time tied the economic narrative to the grander political, social, and moral narratives of fairness and social justice. Politicians and political parties can alter the discourse, but it’s probably easier to hitch a ride on something that people are already thinking, talking about, and in this case searching on the internet.

The economy is an important part of any election campaign, and it is vitally important for political parties to come up with the right package to pitch at the electorate, even if the economy is essentially impossible to predict, and the politicians just hope that the economy turns out in their favour. Politics is not all spin and presentation, but sometimes choosing the right story to spin could be decisive. Perhaps it was in this election.