The two weeks of joyful madness in Wimbledon is finally over, and serene calmness reigns again in SW19 until next summer. Between terrible bouts of hay fever, heat, work, worrying about what is happening in Greece, and general lack of time and money, this year I had not dared to join The Queue (with upper case T and Q, just like The Queen if you follow the very formal and stilted form of writing and as commanded by the Court Circular), even though I live minutes away on foot from the venue, until Wednesday, 8 July 2015, or the ninth day of the Championships. I walked down to Wimbledon Park shortly before 5 o’clock, and The Queue that normally forms like a hideously long snake was nowhere to be seen, so I decided to take a punt. 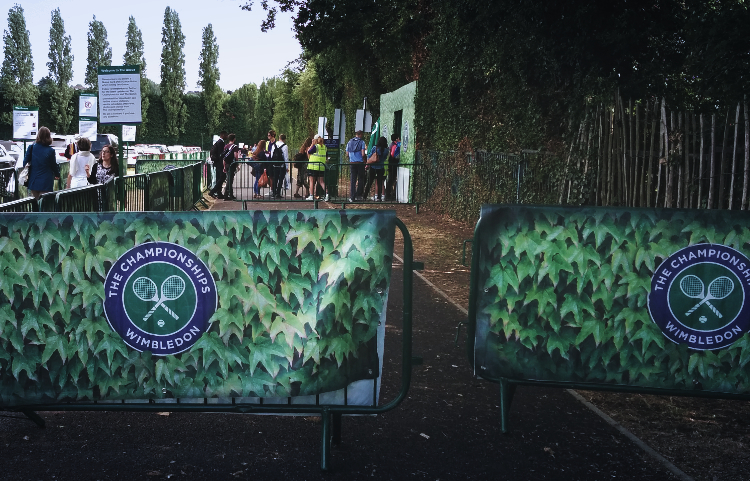 On most days of the Championships, there is a huge queue in Wimbledon Park, but not on this day at around 5 pm.

There were a few reasons besides availability of time: firstly, a strike on the London Underground was going to start at 18:30, which meant many people would leave relatively early to ensure they get home, and there would be fewer people trying to get into the ground; secondly, there was some disruption due to rain, and that usually means play will last longer into the evening; thirdly, the first match on Centre Court on the day featured Andy Murray, and I suspected that there would be an exodus after his victory over Vasek Pospisil; and fourthly, it generally become less and less busy as the second week progresses, as fewer and fewer matches featuring the big names are played on outer courts.

When joining The Queue, stewards hand out queue cards like this one in the picture above. These cards are important, as they are proof that people are queuing at the right place. They also make a nice memento of the visit. The cards are not transferable: I have never seen them being traded, but I suppose that’s possible?

The system regulating The Queue has not really changed over the past few years, though I think it is becoming better organized every year. The first thing to secure is the queue card. I am number 07622. The queue cards are checked by the stewards, and the numbering system ensures that if people have to leave The Queue temporarily, for example to go to the toilet, they can return to the correct position. In my experience, the atmosphere in The Queue has always been very relaxed and friendly, and this occasion was no different. I do believe that some people enjoy the queuing bit of the Wimbledon experience more than watching some tennis. It is nice to chat with others, speculate about how long it would take for us to reach the turnstiles, strategize about what to do once we are in the grounds. The Queue moves in mysterious ways at times, but on this occasion, it was very swift, and I was in the grounds by 6 o’clock.

The entrance into the ground was priced at £14 after 5 o’clock in the afternoon on this day, and play can go on until about 9 o’clock, so there is a good prospect of watching at least a couple of hours of tennis on the outer courts. There were several doubles matches and juniors’ matches, but I chose the option to queue again, this time for ticket resales. The tickets for the main show courts, Centre, No. 1, and No. 2, are valid for the day, but not everyone stays from the beginning of the first match until the end of the last match on that court. When people leave, their tickets are collected or scanned, and resold at the ticket resale kiosk, which is a hut at the top of the hill, opposite No. 1 Court. Centre Court tickets are £10 and others £5. The proceeds go to charity. 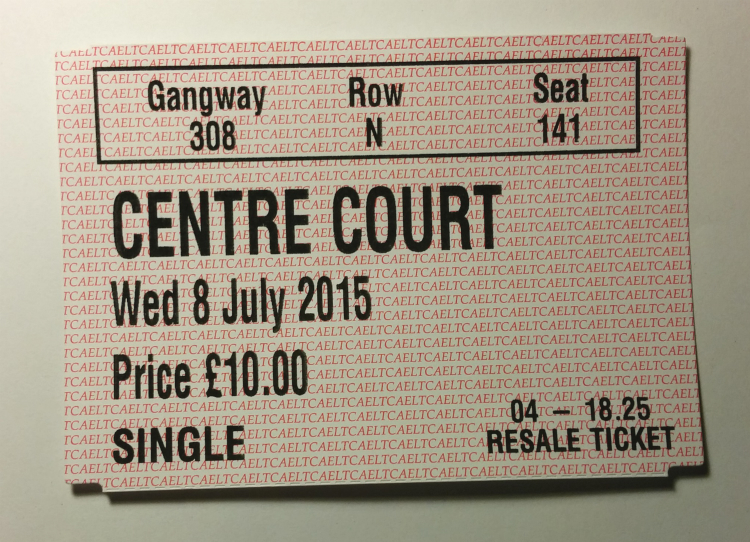 £10 for a Centre Court ticket at the ticket resale kiosk. There is always a queue, but patience usually pays off. The proceeds go to charity.

Queuing for ticket resale is a bit of a lottery, but usually it is possible to watch some tennis, but it can be a whole match or a few games. As I queued up, I had to make a choice: which one should I go for? The match on Centre Court between Novak Djokovic and Marin Čilić was in the second set, and going with the serve. The match on No. 1 between Stan Wawrinka and Richard Gasquet was heading into the third set, after one set apiece. Given the epic match that ensued on No. 1 Court, perhaps I made the wrong decision to go to Centre. As the queue moved forward, Mr Djokovic broke Mr Čilić’s serve and won the second set. If I were to get a resale ticket, and pay £10 for it, how much tennis will I see? It is constant strategizing and decision-making, and the official Wimbledon website viewed on smartphone is extremely helpful in making those decisions. As said, purchasing a resold ticket is a bit of a lottery, but I went for it. Another element of luck is the seat you get on ticket resale. Over the years, I have been very close to the court a couple of times, right behind the royal box once, but also right at the back. 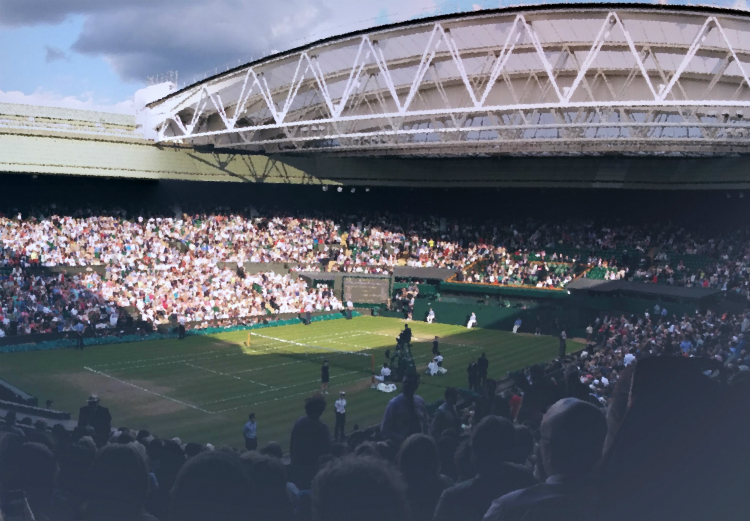 It is not possible to choose seats when purchasing a ticket at the resale kiosk, so it is a lottery. I think I was reasonably lucky as I had a good view.

Gangway 308 is probably a decent seat. The 300s are the middle tier, as it were. The 100s are closest to the area of play, then the 200s, the 300s, and finally the 500s. After obtaining the ticket, it is important to reach the gangway as quickly as possible. People are allowed to take and leave their seats during the change of ends, and as the third set was under way, the first opportunity to take the seat would be after 3 games, but by the time I arrived there, the fourth game was under way. So it was after the fifth game that I managed to take my seat, which was right in the corner and with a good view of the court. In the end, I was able to watch a few games, and Mr Djokovic won: I have seen him play a couple of times in the past few years and on those occasions his speed, agility, and presence on the court were immense, in that he reached and returned almost every ball, and the opponent had to work for every point, but that degree of imperious dominance was not present this afternoon. At least, I felt that way, but then he went on to win the title, so what do I know? 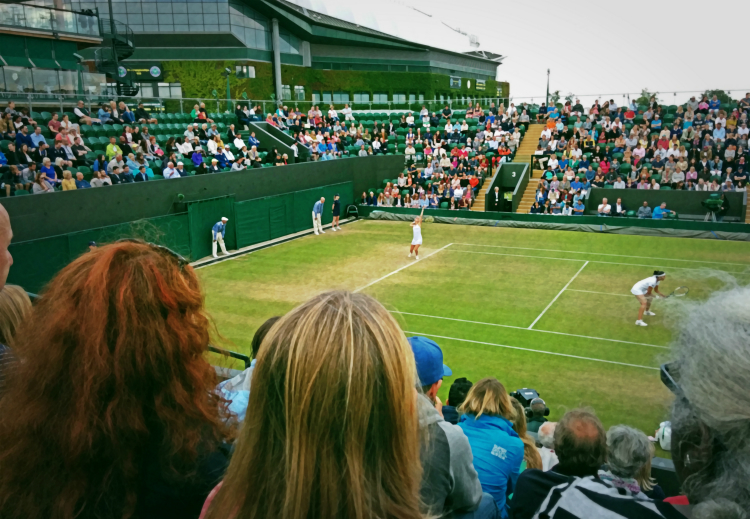 No. 3 Court is the fourth-largest court at Wimbledon with a capcity of 2,000, and on busy days, there is a decent chance to watch matches featuring highly-ranked players.

After this match had finished and the confirmation that there was no other play on Centre, a large number of people exited the grounds, but I was still looking for some more tennis to watch. There was a ladies’ doubles match on No. 3 Court, where the top seeds Martina Hingis and Sania Mirza were playing against Casey Dellacqua and Yaroslava Shvedova. There is no doubt that Ms Hingis is one of the all-time greats of the game whose career was cut short by injuries, and Ms Mirza is a talented player whose career might have taken another trajectory had it been more fortuitous. The pair went on to win the final on Saturday. It was great to watch them play. Ms Hingis in particular seemed to be enjoying the occasion, even though she exhibited fierce competitiveness, skill, and guile. Spectators often empathize with and support players, and feel all sorts of emotions and feelings: heights of elation, excitement, and exhilaration, as well as anguish and disappointment. Weirdly perhaps, the best word to describe what I felt watching this match was happiness at seeing such a great player competing again and relishing the moment. 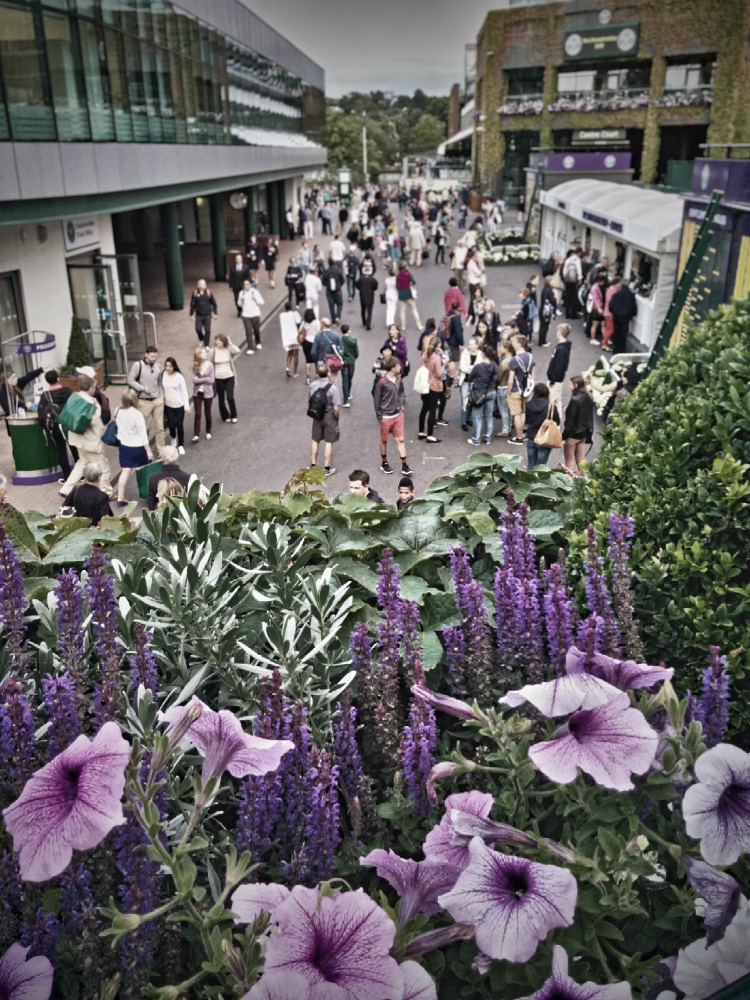 Lack of tacky advertisements and the colours of Wimbledon — dark green and purple — really make the place look nice and proper.

After the conclusion of the doubles match, I wandered around the outer courts and stayed here and there to watch a game or two: they were all juniors’ matches. I wonder if I was watching the big tennis stars of the future. As the sun set and it was getting darker, I made my way out of the venue and to home, but only after soaking up some of the atmosphere. There is really something special about Wimbledon.