Why do people take photographs of paintings in a gallery?

A recent visit to a gallery was spoilt for me, because there were so many people wielding tablets and smartphones and taking photographs of paintings. I really do not understand why. 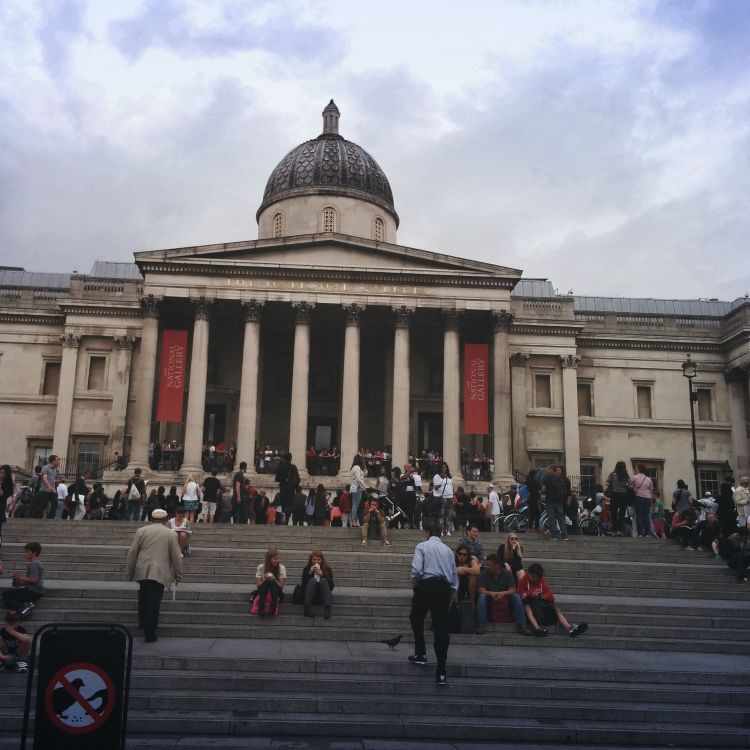 I visited the National Gallery in central London recently and that occasion left me rather annoyed: the smartphone and tablet wielding horde made for a very unpleasant experience. The National Gallery has forbidden the use of selfie-sticks a few months ago (www.bbc.co.uk/news/entertainment-arts-31829535), and I cannot imagine what the place would have looked like when those dangerous instruments of pointless narcissism were roaming free.

As I was standing in front of a painting by JMW Turner (Rain, Steam, and Speed: www.nationalgallery.org.uk/paintings/joseph-mallord-william-turner-rain-steam-and-speed-the-great-western-railway), a man tapped on my left shoulder then essentially shoved me aside – though to be fair he did say excuse me – so that he could take a picture of the painting on his tablet. Then he walked away. He did not see the painting with his own eyes, only through his tablet.

I am an ignoramus when it comes to various forms of art, since I do not think my aesthetic senses have developed sufficiently to appreciate them properly, however, I do think it rather odd and meaningless to take a series of photographs of paintings. There are many beautiful coffee table books and guides, as well as online reproductions, for later study or as reminders of the visit, and even if smartphone and tablet cameras have become better and better, I highly doubt that they would do a better job than a professionally taken photograph under suitable conditions. Above all, is not the point of going to a gallery or a museum to come face-to-face with objects and sharing the same time and space, that unique moment?

It is rather peculiar that people seem to trust their cameras than their eyes, and would prefer to engage with a piece of art later and mediated by a smartphone or tablet camera. In that sense, I can at least fathom why people may want to take selfies in front of paintings, since they are records or proofs of being there, and they would be a good reminder of the visit to the museum or the gallery. They are not just digital reproductions of paintings, but have individual and specific context. A series of digital images of paintings will be just images, and likely to be bad copies, devoid of the context of personal encounter with pieces of art and objects, and tapping on a screen is too mechanical and too repetitive to be linked to the unique moment that someone shares with a piece of art, therefore unlikely to trigger a ‘madeleine moment’.

Of course, people have different ways of engaging with art, and it is not for me to say what is right and what is wrong. Yet I feel I will continue to be dismayed and annoyed by those who only seem to be interesting in doing a gallery instead of taking time and at least see the paintings with their own eyes.