There was a whiff of bleach in the air as I entered Southside shopping centre in Wandsworth yesterday, and for some reason Poundland was shut. In general, I like pound shops: I am sometimes amazed by what I can buy for one whole pound, and quite frequently wonder how products could be so cheap. So whenever I go to this shopping centre, I make a brief visit to Poundland, mostly out of intrigue and in the faint hope of nabbing an incredible bargain.

Quite a few people were wondering why Poundland had its shutters down. There was a notice that looked official. It couldn’t have gone bust, surely? No, it hadn’t gone bust, but it was shut down temporarily by Wandsworth Council. 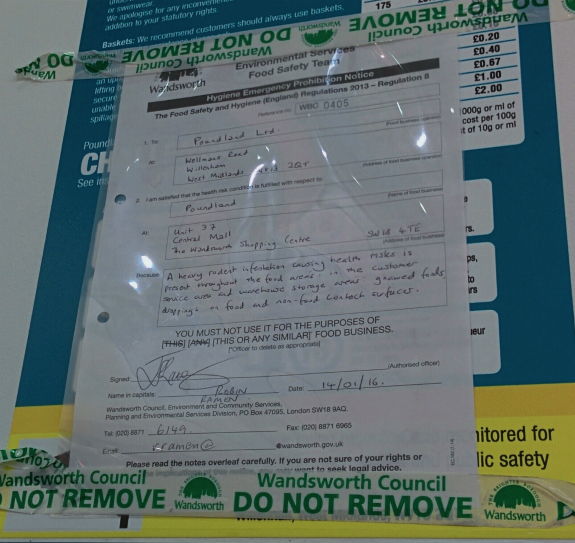 The officer from the council was satisfied that the health risk condition had been met to serve a hygiene emergency notice, and it read:

Yuck! There must have been a thorough cleaning process going on at the premises, hence the smell of bleach. There would be plenty of bleach at a pound shop. There was a strangely gleeful gentleman loitering outside the shop who assumed the role of an unofficial spokesperson and kept on informing passers-by with undisguised relish why this branch of Poundland was closed. Rats! He whispered with a huge grin on his face. Most people were disturbed and disgusted by the apparent lack of hygiene at this store, some vowing never to shop at Poundland again, some even letting out a brief shriek or a shocked gasp, but one person asked when it would reopen.

I don’t think I have ever bought food from a pound shop, and never have been tempted, except once very briefly by suspiciously cheap (and probably nasty) coffee: I doubt I will be buying food from pound shops in the future, and most definitely not from this Poundland.