Tales from the London Underground

I have seen copies on sale at newsagents, but I had never seen anyone reading the Morning Star on the tube until two days ago. 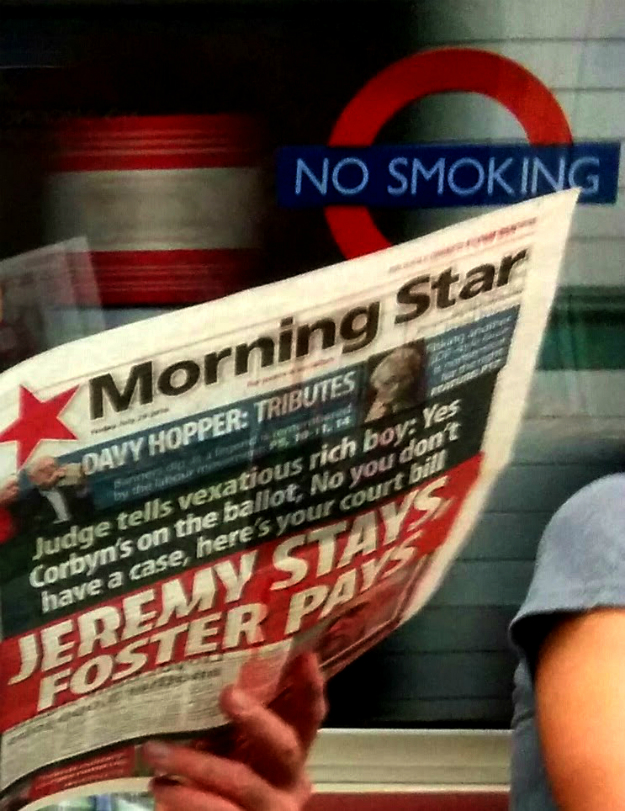 The circulation figure is said to be around 10,000 according to its Wikipedia entry (quoting a Guardian article), so there must be readers. For those who are unfamiliar with the press in the UK, the Morning Star is – to quote Wikipedia further – ‘a left-wing British daily tabloid newspaper’ whose ‘editorial stance is in line with Britain’s Road to Socialism, the programme of the Communist Party of Britain.’

The Underground is a microcosm of London and I have seen all sorts of things while travelling on it: as such perhaps it’s strange that I had not encountered a Morning Star reader before. May be I hadn’t been in the right areas of London for coming across such a scene. I was travelling from Willesden Junction to Warwick Avenue on the Bakerloo line, not a stretch of the network I am familiar with, when a passenger sat opposite me in a pretty empty carriage and started to peruse the paper. North London must be a hotbed of revolutionary activity!

And just in case anyone is wondering, it wasn’t Jeremy Corbyn.