I was on a short British Airways flight from Dublin to London Heathrow last month and decided to peruse the various in-flight magazines and catalogues that the airline provides, because I had nothing else better to do. There was an in-flight magazine titled Business Life aimed at affluent business travellers. It was interesting to read a magazine clearly not aimed at me, as I am neither affluent nor a thrusting business type. Anyway, in this issue of the magazine, I found an interview with a hotelier. That made sense, because business travellers in general are likely to spend quite a lot of their time staying in hotels and they would be interested what the hotels and hoteliers do and have to say.

One way to promote a business is to associate it with famous personalities and drop some names, such as successful business tycoons or celebrities. Another way to promote a business is advertisements by having the products or services endorsed by someone famous. There are many advertisements where the connections between the endorser and the endorsed service or goods are tenuous at best, but such endorsements must work, otherwise businesses would not be spending billions on advertisements and sponsorships. However, there is always a risk in associating or advertising a business by linking it to a particular person as he or she might turn into a liability, due to inexcusable behaviour or because he or she says something awful. 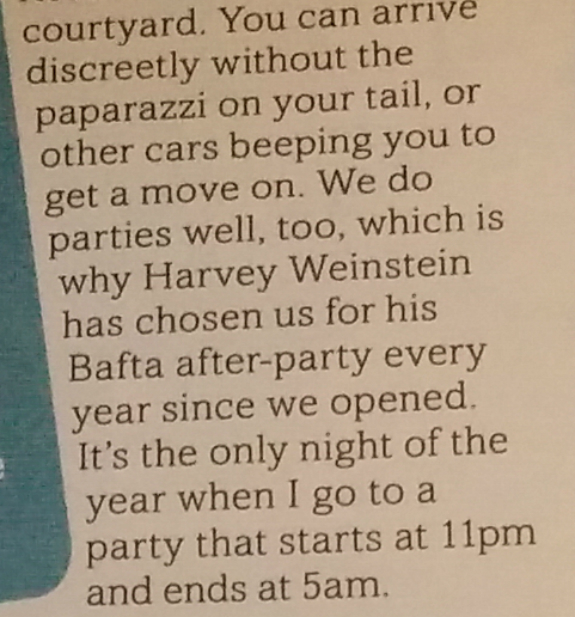 Harvey Weinstein is a very toxic person to be associated with, even if at the time of writing this piece, more and more allegations are surfacing in the worlds of entertainment and politics. Given the sordid allegations swirling about Mr Weinstein, some of which might have taken place in hotel rooms, hoteliers would probably stay very clear of him.

When the interview was conducted and the magazine went to press, there was no hint of the controversy. Being associated with Mr Weinstein was a positive thing, especially for a magazine targeted at successful and aspirational businesspeople, and as such a great name for the hotelier to drop, but now such association is a very bad thing. It would have not been possible to stop press or take the copies of the magazine out of circulation. This must be a case of incredibly bad timing and an own goal for the hotelier concerned.