In the past I have said and written pretty mean things about Heathrow. The old Terminal 2 building for example was extremely oppressive, as I recall: the ceilings were very low and it was very cramped. However in the past decade or so, the airport buildings have improved dramatically. I have not been to the new Terminal 2 yet, but Terminal 5 is very nice, and Terminals 3 and 4 have been spruced up.

There are things that could still be worked on, such as the connecting underground passageways between the train and tube stations and Terminals 2 and 3. They are quite narrow and it can be a challenge to negotiate them with many people walking with their suitcases, trolleys, and bags. And some of the travelator between the stations and Terminal 3 were unavailable due to refurbishment works when I was last at Heathrow on 30 November. 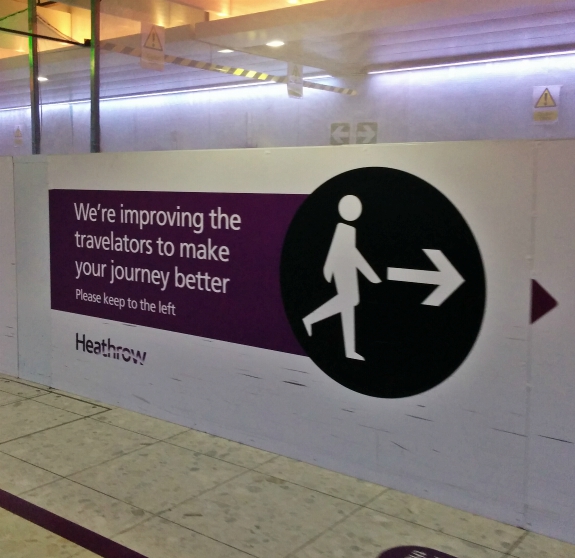 If I am not mistaken, these travelators were being worked on back in spring, when I went to Japan for a few weeks. Out-of-action escalators and travelators are common sights in London, and given that tube stations might even be shut during escalator works for an extended period, this is not surprising. Indeed, it may be mischievously suggested that regular visitors to the UK would be astounded if they find everything working in perfect order.

PS: Even though it is relatively cheap and convenient for me to reach Heathrow, I still believe the airport is in the wrong place as the main hub airport for London, as too many residents underneath the flight paths are subjected to noise and air pollution, and as such it should not be expanded in my view.