Out of curiosity, I contacted Marks and Spencer via Twitter, and they have been very good and patient in responding to me. Apparently this is a piece of legal text that is required as per EU regulations. So there you go, I have been barking up the wrong tree. However, I still find the text a little odd for consumers in the UK. Furthermore, I have found other products with similar instructions, that is to say call a poison centre, but they do not mention physicians.

I bought a bottle of washing-up liquid a few days ago, and not just any washing-up liquid, but M&S sensitive washing-up liquid, because my hands deserve it. Just in case I had been washing up incorrectly all these years, I decided to read the instructions on the back of the bottle, and they were a little odd. They sounded more American English than British English to me, even if the product was not called dish soap, dish detergent, or dishwashing liquid as it might be in the US. 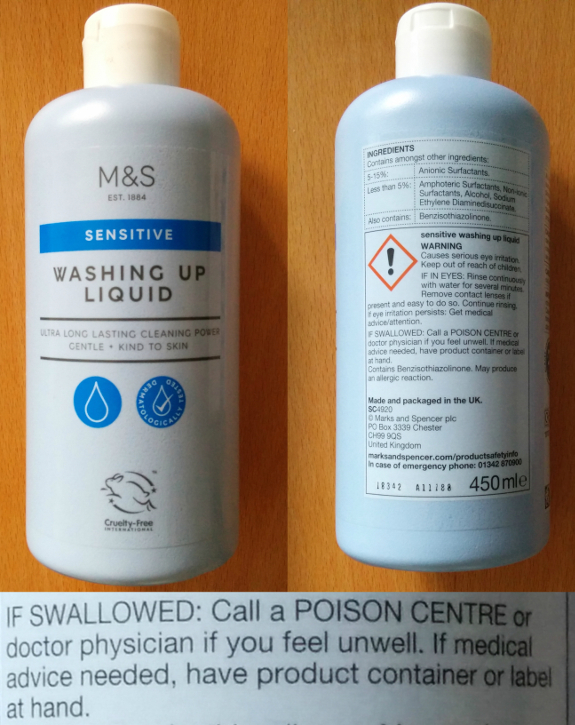 What should I do if swallow this washing-up liquid? The instructions read:

IF SWALLOWED: Call a POISON CENTRE or doctor physician if you feel unwell.

According to the American Association of Poison Control Centers, there are 55 poison centers, which share a common telephone number, and calls are answered by trained medical practitioners. As such, an instruction to call a poison centre makes sense in the US context.

However, do such poison centres exist in the UK? I had never heard of them before. After a brief online search, I found out that there is something called the National Poison Information Service. Its role is ‘reduce the burden of healthcare associated with poisoning by the provision of rapidly available, consistent and evidence-based advice to front-line NHS healthcare professionals.’ (www.npis.org) Crucially, it does ‘not receive calls from the general public.’ (www.hse.gov.uk/chemical-classification/classification/poison-centres.htm)

Also, doctor physician is rather strange. It probably should have been doctor/physician. This expression is an unnecessary repetition. It is rare – or at least I have very seldomly encountered instances – in British English where someone qualified to practise medicine is referred to as a physician. Such person is usually referred to as a doctor. For instance, other UK products with similar instructions and warnings state talk to a doctor or consult your doctor. However physician would be expected in these situations in American English.

This washing-up liquid was made and packaged in the UK, but the instructions do not sound particularly British. I wonder how that came about. A botched copy-and-paste job? I had expected better: after all, it’s not just any washing-up liquid, but M&S sensitive washing-up liquid.