As someone living alone and an introvert who does not have much of a social life, self-isolation for seven days is not a particularly daunting prospect, especially as I have borrowed 20 books from the local library, and practising a reasonable degree of social distancing has not been challenging. Thus far I have had no symptoms and I have not come into close contact with someone who has tested positive for the novel coronavirus. I keep washing my hands, but not touching my face has been difficult, because I tend to adjust my glasses quite frequently and do so unthinkingly. Over the past fortnight, I have been very conscious of the fact when I am outside and I have managed to stop touching my face most of the time.

I have enough food for a week or two at home to survive self-isolation if such becomes necessary. As I do not wish to contribute to panic buying and deprive goods from those who really need them, I have been replenishing my stock by shopping small amounts every day. A dilemma I face is whether to use public transport to travel to larger supermarkets. By going to big supermarkets, I have access to a wider and cheaper range of products, and doing so may relieve the pressure on the smaller local supermarkets that are constantly running out of stock. There is a risk that I catch the virus, but far more serious is the possibility that I am an asymptomatic carrier and putting others at risk. I have used public transport over the past week, but I have tried to minimize its use and avoided the rush hours. 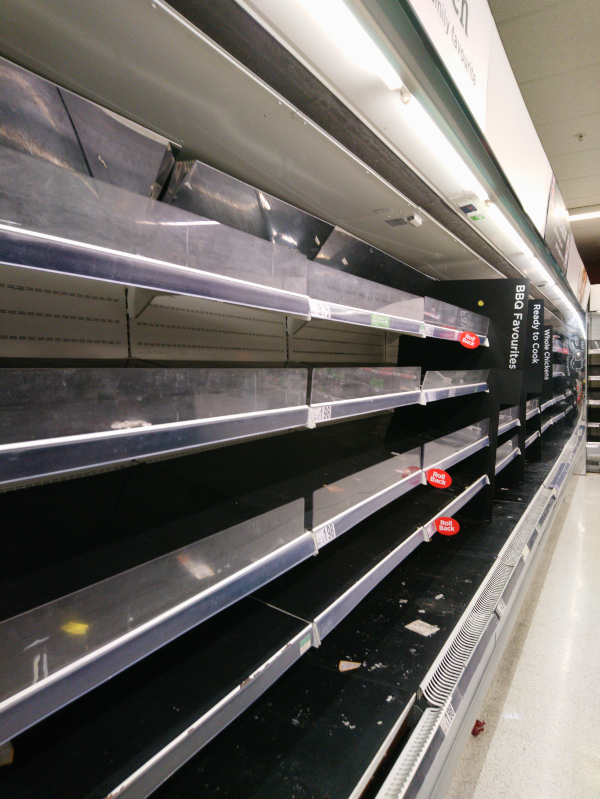 It is quite startling how shelves are emptier by the day. Things seem to disappear more or less indiscriminately now, and I wonder where people are keeping their prized purchases, especially perishables that require refrigeration or freezing. Will they ever consume their hoarded haul? Yesterday for instance, I had to go to three local supermarkets before I could find a cucumber. It helps that some of the things I want to buy, for example tins of pressed cod roe and jars of pickled cockles, are not particularly popular among the panic buyers. I am still in a defiant mood as far as toilet paper is concerned: even though I could have bought toilet rolls, as I have seen them in supermarkets on a few occasions, I have not given in to temptation. I will be starting to use my penultimate toilet roll soon, and that will be the point when I feel justified in buying toilet rolls.

The United Kingdom has been going through a very divisive period politically and socially during and following Brexit and the Government is seen as suspect by many. I do not believe the Government is malevolent, irrational, or horribly incompetent, though the last is perhaps arguable. It is far better that the Government changes its policy when the situation changes than stick with the initial policy come what may, and better late than never. However, the Government is in my view struggling to impose clarity on what people should and should not do, and it has elected to take a far less interventionist policy regarding social distancing in comparison to other European countries that have introduced drastic and wide-reaching measures. Schools are not closed, even though anecdotally many teachers and pupils are in self-isolation. Pubs are not shut, even though people are not recommended to visit them. Museums and theatres are not shut by governmental order, but many have closed on their own accord.

The British approach relies on the collective self-discipline and empathy of its population, for people must voluntarily observe social distancing and isolate themselves if they show symptoms, and that they do so not only to protect themselves but more importantly also others who are more vulnerable and at risk than them. It is highly questionable that everyone is complying with the guidelines and advice, thus I wonder what degree of non-compliance is built into the modelling that informs the Government’s decision-making. If non-compliance endangers the modelling and the strategy based on it, then compulsion will be required.

If the number of confirmed cases and moreover deaths increases rapidly, and the NHS is overwhelmed, then the Government is likely to impose severer restrictions on the population, analogous to the policies taken by other European governments. If that were to happen, then the Government would be accused of not having acted earlier. Indeed it would be too late, and counted as an opportunity and many lives lost. A clearer picture should emerge over the next few anxious days.