I know where Hogwarts School of Witchcraft and Wizardry is, because I found it on Google Maps! For full disclosure and to the horror of everyone I know, I haven’t read any of the Harry Potter books, and I have been dragged along to see just one of the many films, so my background knowledge on this school is very limited. Anyway, for some reason this listing was in German (Hogwarts Schule für Hexerei und Zauberei), and the location apparently secret (geheim), but the pin was right in front of King’s Cross station in London. 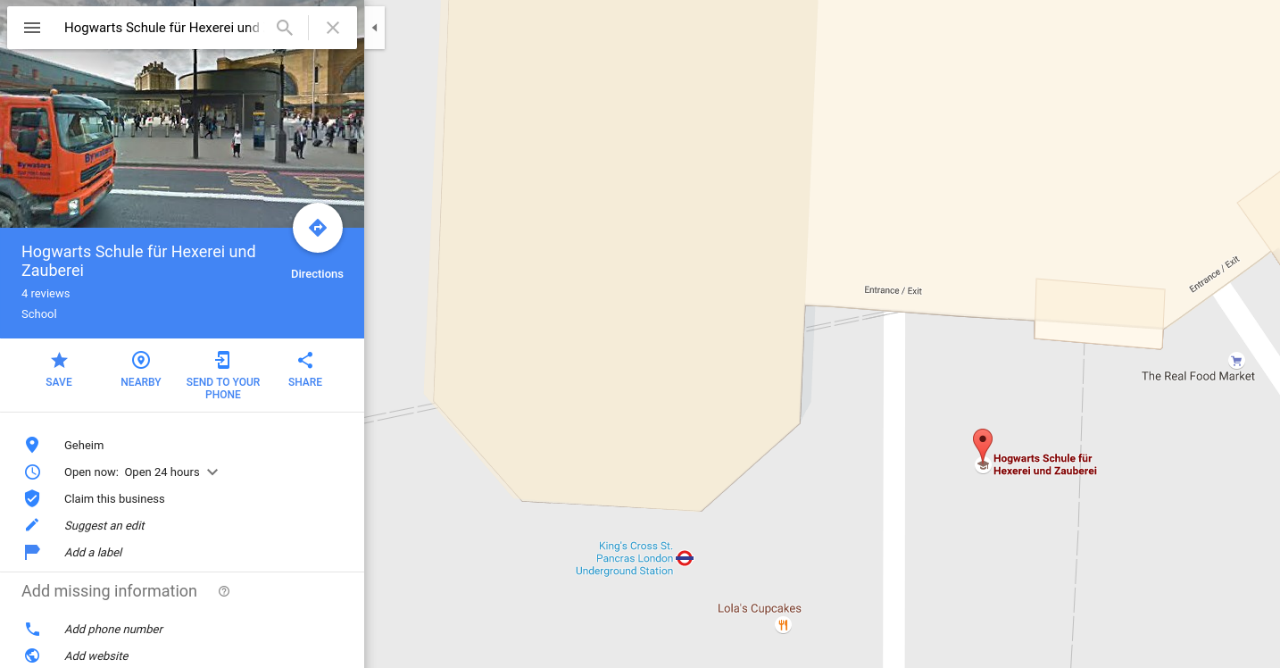 A killjoy that I am, I marked it as closed: the change was accepted immediately by Google, and was gone from Google Maps quite quickly. So far, so good. 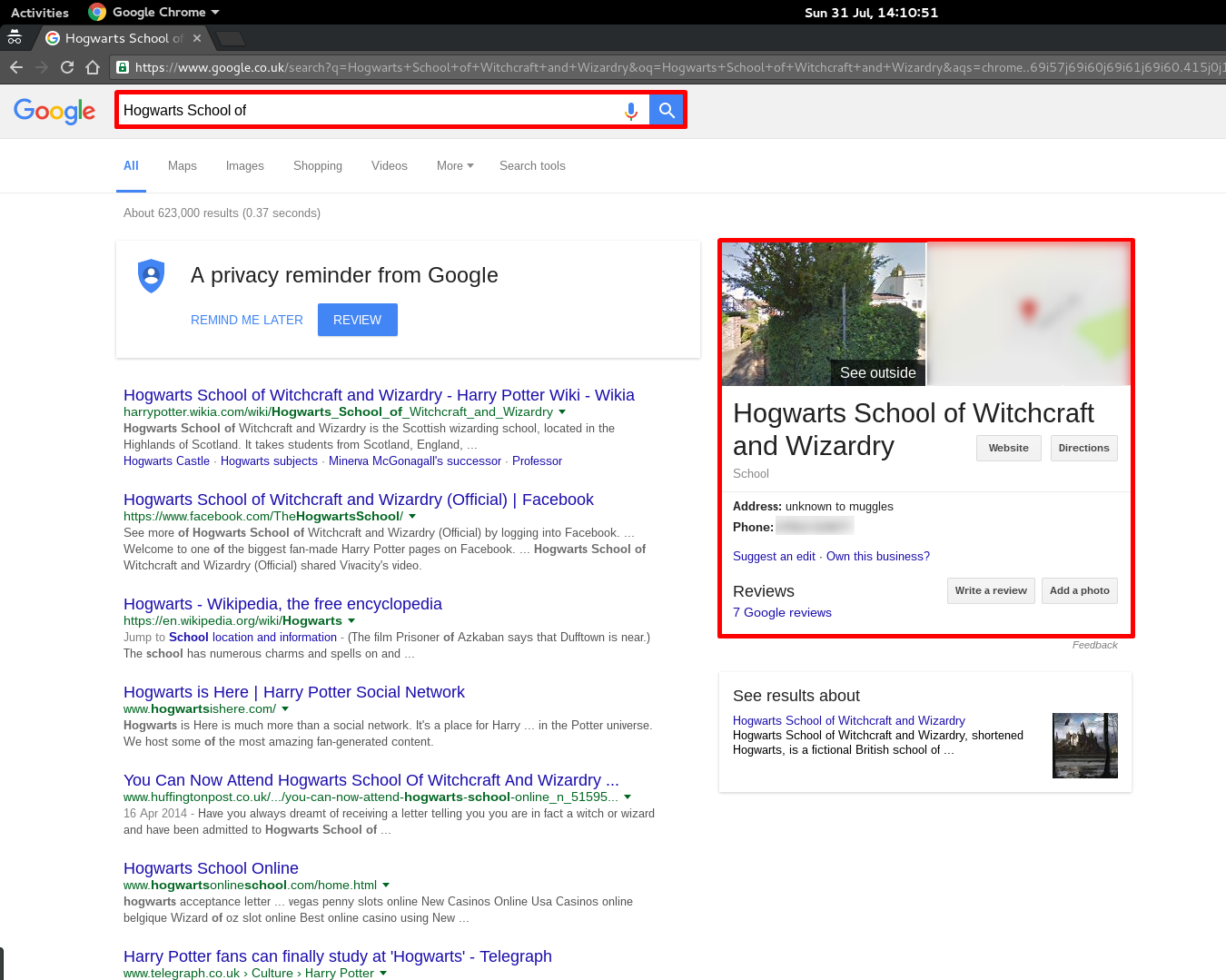 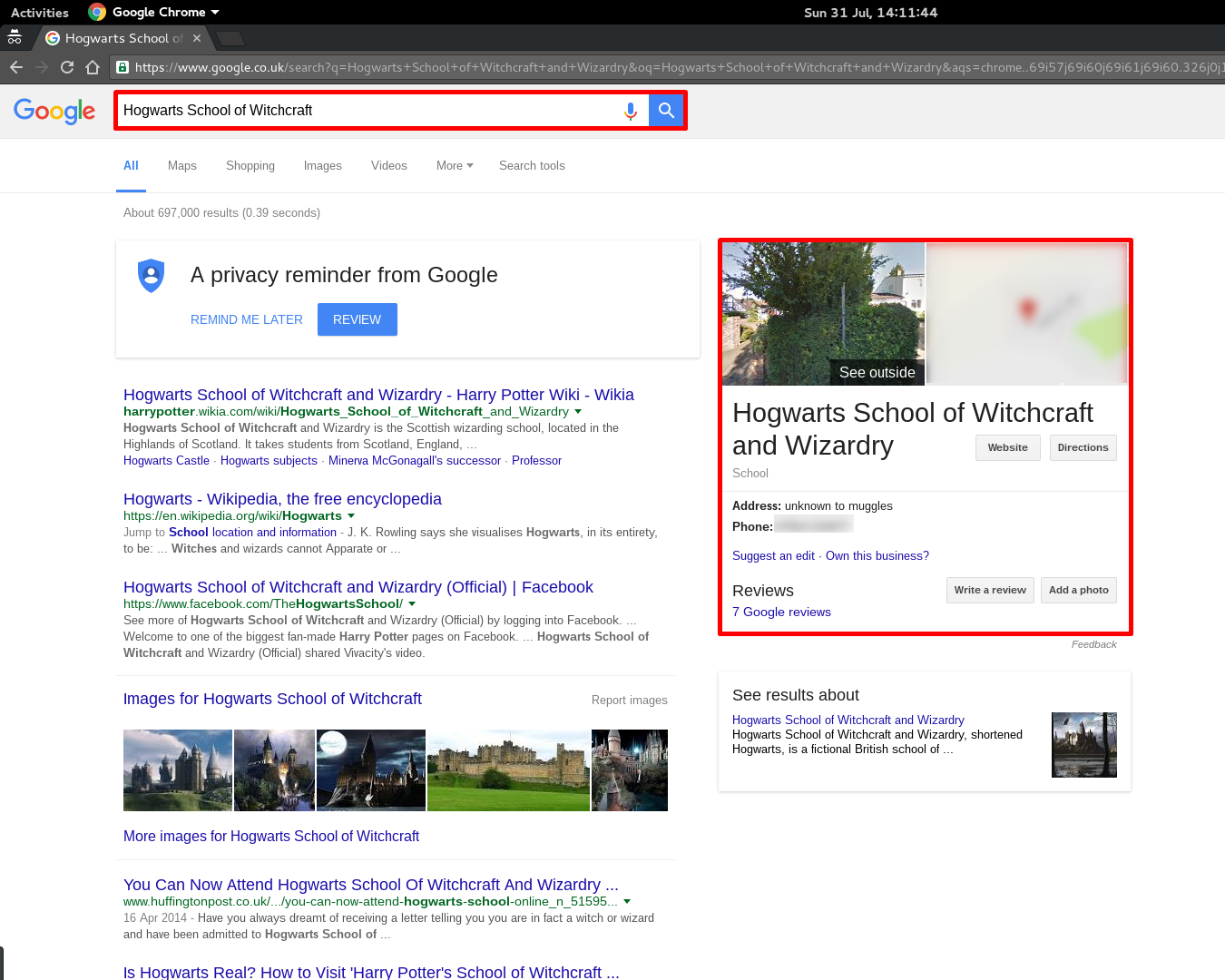 Searching for Hogwarts School of Witchcraft and Wizardry on the other hand triggered the expected knowledge graph based on Wikipedia. 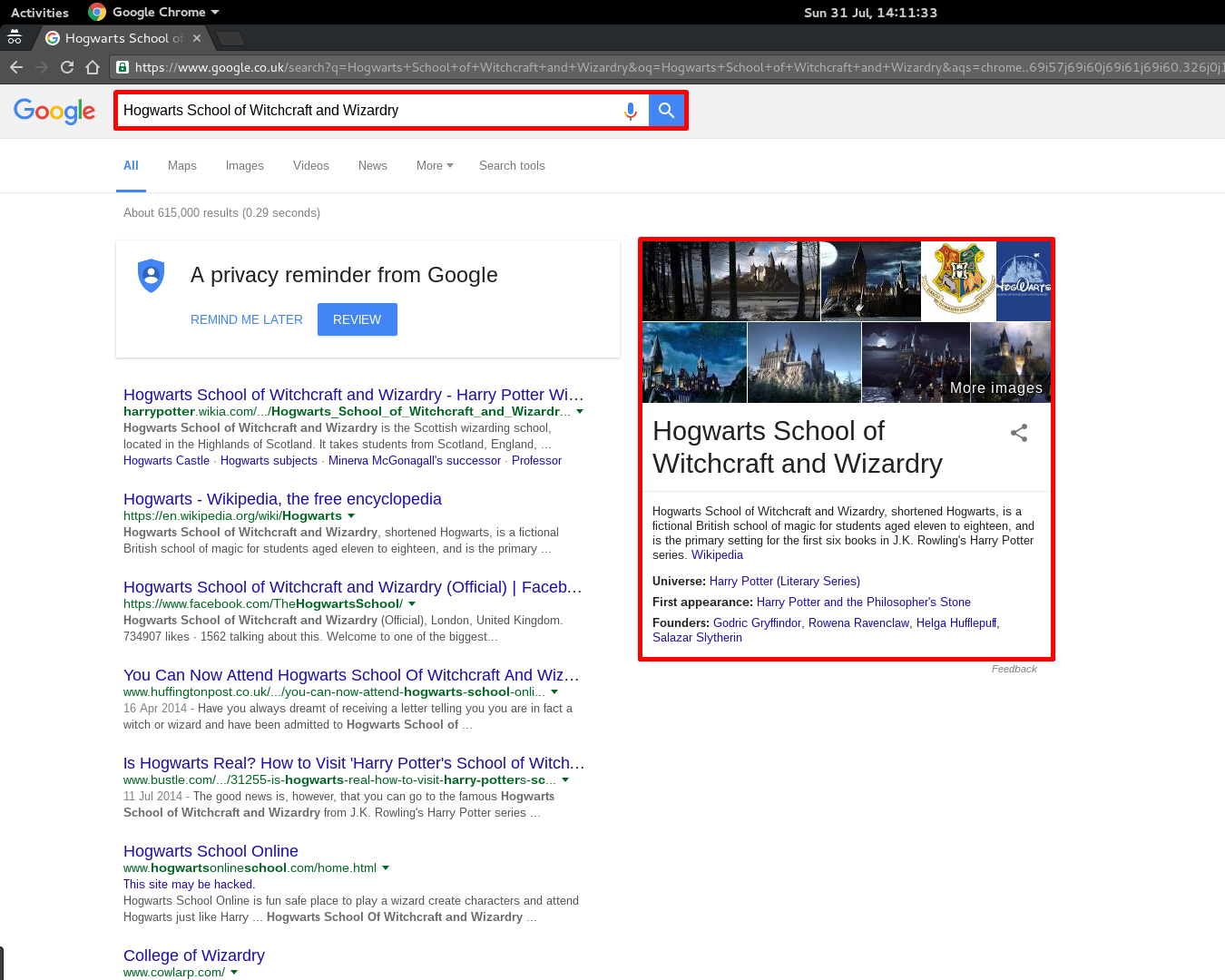 On Google Maps, searching for Hogwarts returned the following, with the fake / spam listing at the top of the list. 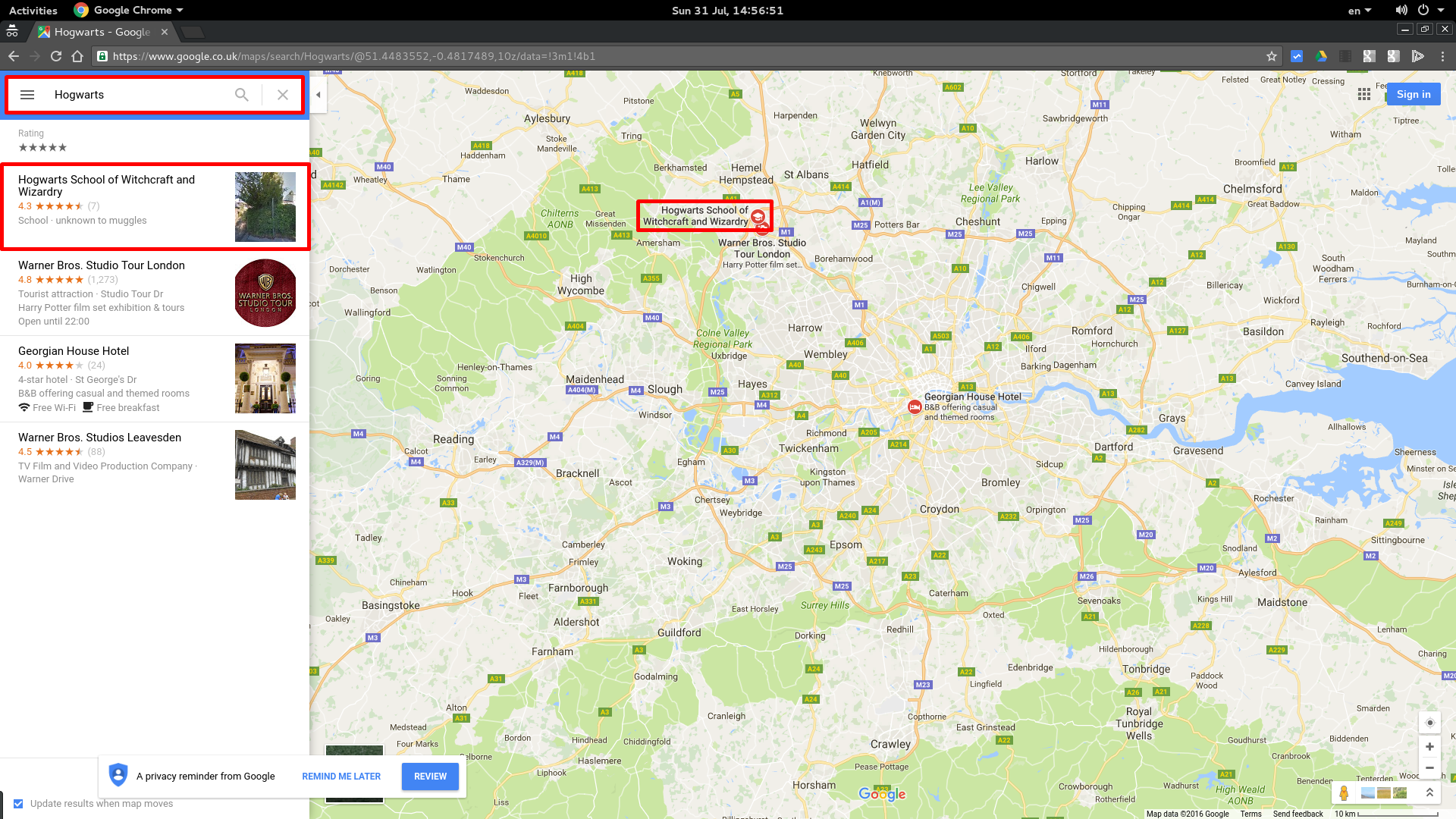 Clicking on that top listing, a phone number and a website (both redacted) were listed.

As far as I was able to establish, clicking on the link from Google properties (such as from Google Maps) resulted in the visitor ending up on a affiliate site for online casino sites (see below: the URI is redacted). 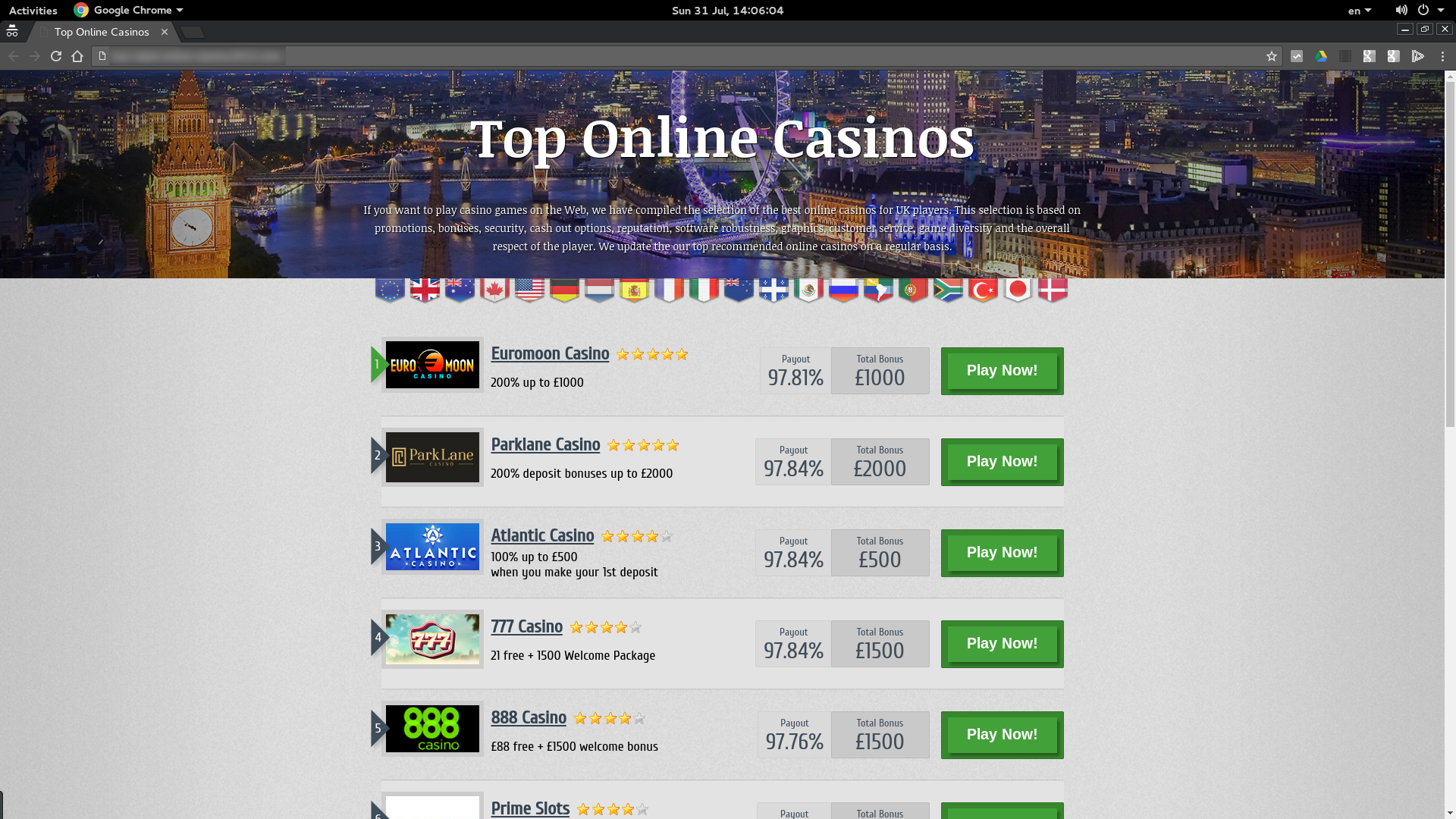 It looked like another affiliate page was served to the Google search crawler. Typing in the URI directly into the address bar, however, showed a ‘normal’ site.

This listing in my view attempted to generate traffic from Google entities to the linked site, thus spam, either by the creator of the site, or someone who had hacked it, or perhaps both: the site owner might have created the local listing to drive traffic to his or her site, but the site was then hacked by a malicious third party. Even more fancifully, a malicious third party might have hacked the site, then created a fake listing. Whoever created this listing for whatever reason, and whoever was set to gain from the affiliate links on the casino site, it was not good for users, and it shouldn’t have been there, so it had to go.

I reported this listing on on 31 July 2016, and I finally received a notification of its removal on 16 August 2016. I doubt my report alone would have led to its removal: it is thanks – I believe – to many others who also reported this listing. Google is not unknown for taking a leisurely pace in removing clearly fake or spam listings, and this instance unfortunately was no exception. It would be hard to know how much traffic was generated to the site, but I suspect it would have been substantial, or at least sufficient to make it worthwhile for the spammer to put an effort into it. 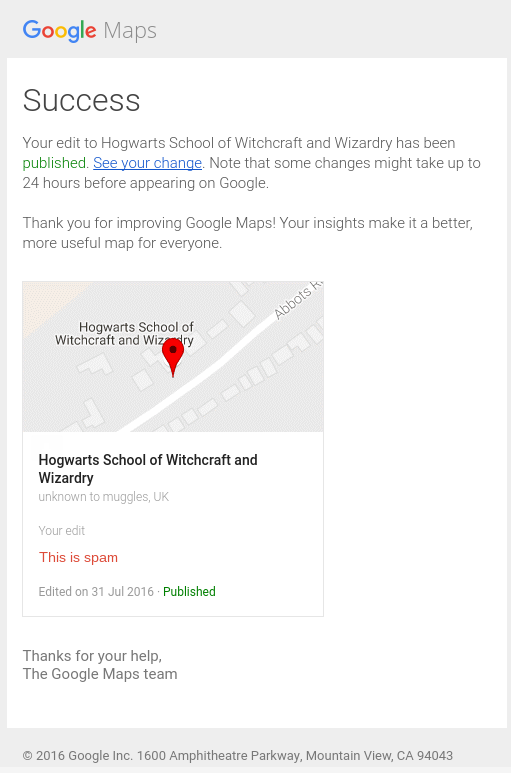 Google, like many online companies, is engaged in a never-ending war against spam. This is a very minor skirmish in that war. This war could be lost if Google were to lose the confidence of consumers: if people looking for accurate information encounter inaccurate information too many times, then they would seek another, more reliable source. Local data are quite sensitive, since people might physically go to places based on Google Maps. It is unlikely that anyone would have attempted to visit Hogwarts as was supposedly located on the map, but people may in other context be conned into thinking that a business without actual presence to be local to them.

The physical world surrounding us is contantly changing, involving a huge amount of data, and Google allows different stakeholders to add, remove, and amend the information on its maps: business owners can edit their listings, users can report or alter the listings. In an ideal world, crowdsourcing the process of maintaining the most up-to-date and accurate local data would work: it may be a glass half full or glass half empty situation, where we should be pleasantly surprised that it is working most of the time, or be completely aghast that there are horrible howlers some of the time. Google will have to become better and faster at separating the wheat from the chaff, so that spamming in various forms becomes less profitable. It would also lessen the irritation I had felt – and presumably others feel – at seeing spam listings linger on and towards Google for its tardiness in removing them.

It seems fair to surmise that spam will continue to be an issue for providers of mapping and local data – including Google – and they will have to find a way to ensure the most accurate information possible as contemporaneously as possible. It will be interesting to see what approaches different providers adopt, and which will prove to be the most successful.