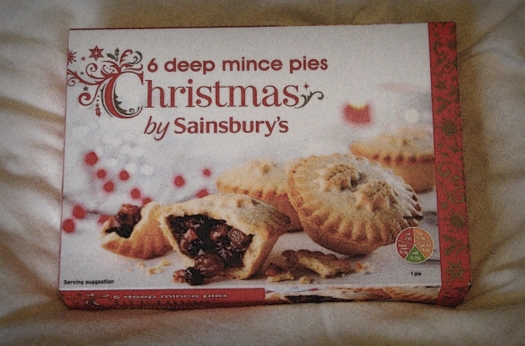 Mince pies. I love them. They are about the only good thing accompanying the rampant commercialization of Christmas. Americans are lucky, because there is Halloween, and then there is Thanksgiving (Canadians have already had theirs), before the Christmas / holiday season starts. In Britain, any hint of autumn, and even when the recently passed summer’s body is still warm, it is time to sell stuff for Christmas. Go to London in late August, and restaurants are already taking bookings for Christmas parties. Supermarkets start to stock biscuits with reindeers on some bland snowy wintry scene on the tin in September. By October all sorts of things are Christmassy.

But then, all is forgiven (or — more accurately — at least I forgive them whoever they may be), because mince pies are on the shelves. So they there were, in the local Sainsbury’s, sat prettily in a box in red, white, and gold, and 2 for £2! They will be gone in days, but I still chuckle at the fact that the Christmas by Sainsbury’s range mince pies are best before 2 December, and I think that is 2 December 2013.