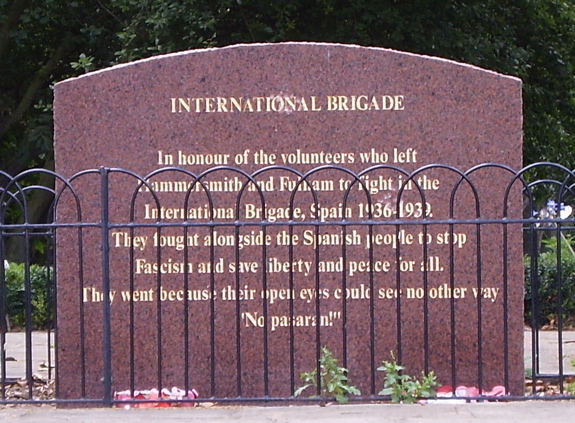 ¡No pasarán! A cry that has been used in many different contexts, but most closely associated with the Spanish Civil War. A few days ago, I went for a walk alongside the Thames in Bishops Park and found this memorial to the volunteers from Hammersmith and Fulham who joined the International Brigade during the Spanish Civil War. According to the UK National Inventory of War Memorials website, 37 went to Spain to fight and all returned.

The Spanish Civil War became in part a proxy war between Fascism and Communism, in which the Nationalists were supported very heavily by Italy and Germany, and the Republicans by the Soviet Union. Liberal democracies of the time stood by, yet there were those who could not stand by and joined the International Brigade. Remembering the past is not always straightforward, as in this case where the volunteers fought outside state control and on the losing side, even if the cause was just and their motivation noble.