After play had been halted for a couple of hours because of rain on all courts except the Centre, I decided to go to the Wimbledon grounds to see if I could watch a few matches. The entrance price for the grounds is £20 until 5 PM in the first week of the Tournament. However, after 5 PM, it’s £14 and matches go on until pretty late in the evening.

There is a very stern warning on the queue card that states queue jumping will not be tolerated. Queue jumping is almost the most socially unacceptable thing that a Briton can do.

Tickets at the gate are sold for cash only.

As the weather had been very bad in the morning and early afternoon, the queue wasn’t particularly long. The usual system was in operation. Join the queue, and stewards hand out the queue cards. I was number 8411. After going through airport-style security checks, crossing the bridge, and paying £14 in cash, I was inside the grounds within minutes, which is a much less tiring thing to do than queuing up from early morning.

The Wimbledon crowd is an interesting mix. There are those who queue up overnight by pitching tents to obtain tickets for Centre, No 1 and No 2 Courts still sold on the day. There are others who queued up early morning to gain entrance to the grounds, and watch matches played on the outside courts, or on the big screen outside the No 1 Court, which has been known variously as Henman Hill, Rusedski Ridge, and now Murray Mound, taking its name from the best British hope of the time. Some of them will queue up in front of the ticket resale kiosk, after having queued already for such a long time. The reserved seats for the Centre, No 1 and 2 Courts are sold for the whole day, and some people will leave after the first or the second match played on the court, even though there may be three or more matches scheduled for that court. When the ticket-holders leave the grounds, their tickets are collected or scanned, and are resold at a lower price. Then there are those adorned with hats and donning blazers with reserved seats or admission tickets, who take their seats at a leisurely manner. It’s a socially a very mixed and diverse scene, and perhaps a bit like horse racing in that respect. There must be some sociological or anthropological studies on the crowds at sports events and venues. 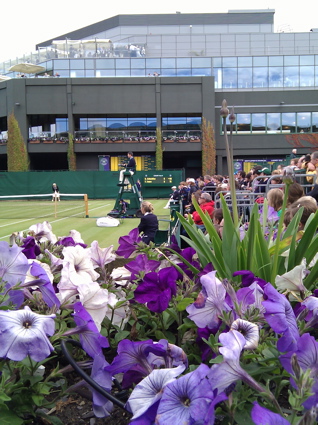 On the first few days of the Tournament, there are plenty of matches being played on outside courts, so it’s actually a quite lot of fun. The top seeds may not be playing but a number of decent players are in action. Some courts have quite a lot of comfortable seat (Courts 3, 12 and 18). After milling about for a while, watching a game here, a set there, I went to Court 3 and watched an absorbing match between Miss Petković (11th seed) and Miss Dubois (which is very Wimbledon in that umpires refer to female players as Miss or Mrs [player’s surname], though this tradition has been dropped from the scoreboards as the BBC link at the bottom shows), which started at around 7 PM and lasted until past 9 PM. I have to admit that I like watching a match from the beginning to the end. The fortunes change, and one point could make a difference in the dynamic of the game, or a wrong call by the line judges or a net cord. Each match is like a story, a book, and I’m the type who needs to read it from the beginning, and feel a little uncomfortable about dipping into a book somewhere in the middle.

Given the weather earlier in the day, it was perhaps not surprising to see that this match was watched by a relatively sparse crowd. This match wouldn’t make it to the top ten matches of the Tournament, but it was a good contest to watch. Towards the end of the match, it was becoming distinctly chilly.

BBC: Why has Wimbledon dropped ‘Miss’?