This is a clarificatory or explanatory note to a piece (Terminological confusion │ Notes on Google+ │ 22 December 2013) I have written yesterday. This clarification or explanation was necessitated due to infelicitous wording on my part, when I shared the mentioned post on Google+ as explained below. The post has been shared a few times, and generated a few comments, and valid points have been raised: I would like to thank those who have shared and commented on the post and prompted me to write this note, though I feel it would be rather invidious to name individuals. 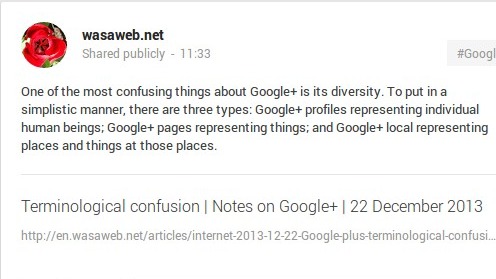 A link to the article was shared with the accompanying text that read as follows.

One of the most confusing things about Google+ is its diversity. To put in a simplistic manner, there are three types: Google+ profiles representing individual human beings; Google+ pages representing things; and Google+ local representing places and things at those places.

It was badly worded, since it together with the title of the link (Terminological confusion │ Notes on Google+ │ 22 December 2013) could reasonably be read to suggest that many users of Google+ may be confusing the concept of three types of Google+ entities, instead of confusion arising from the lack of standardized and easily differentiated terms for the three distinct types of Google+ entities that I had wished to write about.

To expand on the point made in the preceding paragraph, I think most people will understand when explained clearly that there are three different types of Google+ entities representing three different relationships: Google+ profiles representing individual human beings, Google+ pages representing things, and Google+ local representing places and things at those places. The terminological problem arises when people do not know what to call these different Google+ entities, even though they know what they are. For example, I have come across cases where some people use the expression Google+ page when they actually meant a Google+ profile: they were perfectly aware of the differences between the two, and that it (in this case a Google+ profile) represents or ought to represent a person. Such mistakes will occur time to time, as it may even be a slip of the tongue, and I do not think it is too serious.