England has been utterly and depressingly terrible in the current Ashes series, and a 5-0 victory for Australia looks increasingly likely, after England somehow contrived to lose the match in Melbourne from a very strong and promising position. It does not bode well for England, since it looks as if there will be a generational transition soon, not least with the rather impromptu retirement of Graeme Swann from the game. Looking at the current Test series in South Africa, India looks a decent young team post-Tendulkar and other greats, and South Africa looks an extremely strong team even if the retirement of Jacques Kallis will deprive it of a great batsman and a great bowler. England will not have to face South Africa for a while, but India is touring this coming English summer, and that will be a stern test for the hosts. 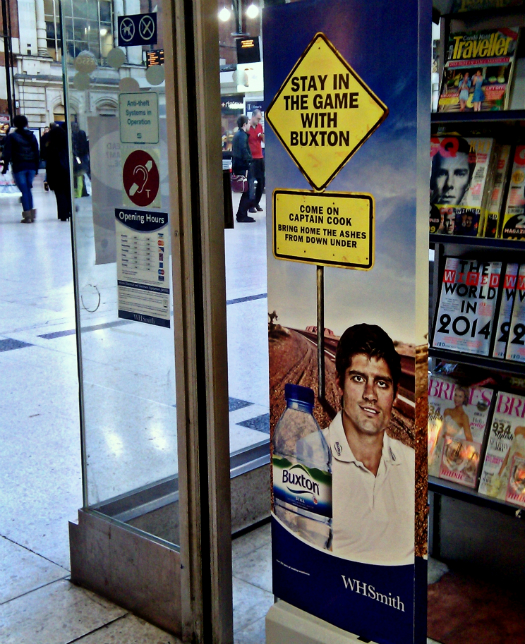 Anyway, companies obviously want to associate themselves with successful sports personalities and teams by sponsoring them. In sponsoring a team, a company hopes that the team will win or do well and progress far into a tournament. In this case of associating with the England team as in the photograph, the company would have hoped that England do well and retain the Ashes. What should a sponsor do in such cases, when the team is shambolic and embarrassing, and as a brand it would not really wish to be associated with such a team? The photograph was taken on Christmas Eve, and perhaps there was a fightback to come, so while the series had been lost, there might have been some hope of salvaging pride. That did not happen. How long should this hollow advertisement remain in place? England did not remotely stay in the game on most sessions and on most days in the series. Perhaps people will see it in a sarcastic way and the brand is not hurt? Perhaps brands are relatively immune from the bad performances of the sponsored personalities and teams, as people only recall the sponsors dimly when the team is doing well and talked about? After all, it’s pretty unlikely that people will stop drinking this brand of mineral water just because it sponsored an abysmal England cricket team.