I live within a walking distance of the venue of the Wimbledon Tennis Championships, and it’s the busiest fortnight of the year for the area. There are parking restrictions, lots of traffic, lots of people, and many businesses trying to make as much money as possible. In previous years, I have queued from early morning, and even overnight once to watch the matches. It’s a tiring but also an exhilarating experience.

At the moment, it’s raining quite heavily, and there is unlikely to be play except the Centre for some time. Though this being the weather in Britain, it’s possible that it’s raining where I am, but nice and sunny less than a mile away. There is always a strange feeling watching something taking place so close on the television screen. Somehow, I think that the events on the television should be taking place somewhere far away. But I digressed. 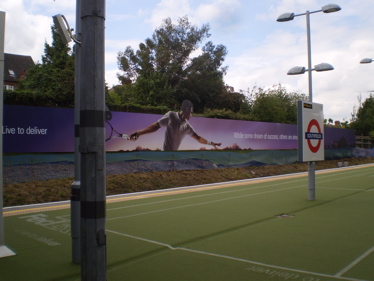 Southfields station is very busy in the morning, with people getting on trains to towards central London for work, and people getting to go to the Tennis. Every year a sponsor mocks up the platform as a tennis court.

Earlier today, I went to Southfields to do some errands. Being the closest London Underground station to the venue, there was a constant stream of people exiting the station. As with any big sports event, there were a few ticket touts trying to sell tickets to the Centre and No 1 and 2 Courts. The Centre Court has a roof, so matches take place whatever the weather, but No 1 and 2 Courts are at the mercy of the ever changeable British weather. Of all court surfaces, the one used in Britain has to be grass, that becomes dangerously slippery when wet. So, while ticket touts can be reasonably confident that they can shift the Centre Court tickets even if it’s raining cats and dogs, I wonder how they do with No 1 and 2 Court tickets. I’m curious about how ticket touting works, since it seems to represent quite a lot of risk for both the tout and the punter who buys a ticked off him (ticket touts are men and I am yet to encounter a female ticket tout).

According to Wimbledon’s website (www.wimbledon.org), if there is less than an hour’s play, then the ticket is refunded fully, and there is a 50% refund, if there is play for more than an hour, but less than 2 hours. The refunds will be made to the original purchaser. So if someone buys a ticket from a tout, possibly at more than the face value of the ticket, and there is no play, it’s money down the drain. The buyer is risking quite a lot, especially betting on the British weather, to get value from the ticket, which may be more expensive than the face value. If ticket tout is the original purchaser of the tickets, then presumably he would get the face value of the tickets back, but he didn’t make profit and got soaked trying to flog his wares. If the tout had bought tickets at more than face value, and is trying to sell at an even higher price and profit from the margin, then he loses out. Or is he selling forged or fake tickets?