Do you have to be an Aussie to work for Aussie Man and Van? 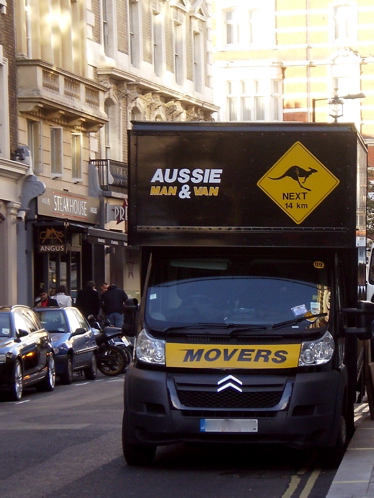 The picture isn’t particularly recent, but when I’m on a bus, heading towards the town, I pass by the depot of the company. There, parked in a neat configuration, are many vans like the one in the picture, which I often see toing and froing the streets of London.

I always wondered whether you had to be an Aussie to work for Aussie Man and Van. A brief look at the company’s website – www.manandvan.biz – explains that it is more about the Aussie can do spirit, approach and attitude. For some reason, many Australians seem to have the ability to combine strong work ethic with being laid-back.

Aussie Man and Van, it sounds positive. Perhaps it’s a generational thing, as my contemporaries had basically been fed on the Neighbours, Home and Away diet. I was never really into soaps, but for many people, these Australian soaps were the staples of lunch-time or after-school television viewing. Compared to the misery and conflicts, or staleness, and the grey skies of British soaps, the Australian programmes radiated sunshine, and fun (as well as the occasional conflict, which always seemed, for some inexplicable reason, less sinister than the ones seen on the British soaps). And, of course, Australians excel in various sports.

We are never free from prejudices and stereotypes. I doubt Australia is always about sunshine and positivity. Yet some views are positive, like in this case, some are less so. Just imagine, what kind of person you think would turn up if you had telephoned Cockney Man and Van, or Essex Man and Van, or Geordie Man and Van, or French Man and Van ... What did you imagine? It probably tells more about you than about the people from the East End, Essex, Tyneside or France.