I like travelling, but there is something I dread, and that is Heathrow. The airport is not quite hell on earth, but purgatory. People go through the airport, and they may be stuck in the terminals, because the flight is delayed or cancelled due to the weather and other reasons, but in most cases, they will board planes and fly to their destinations. It’s not a place of eternal damnation, but a series of ordeals from checking in to the security clearance to the mêlée on boarding. It’s somewhere travellers have to endure before they are allowed to go on a plane and to the destination, which for holiday-makers would be closer to paradise on earth than London. 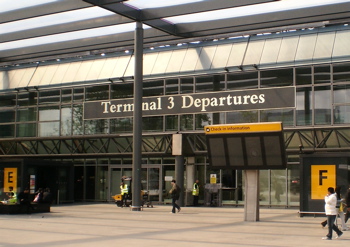 Heathrow always stresses me out more than other large airports in Europe. It’s not the people who work at the airport: they are usually courteous and helpful, and I haven’t had particularly bad experiences, whether from those working at the check-in desks, or the security personnel, or the shop assistants. It is really about space: everything is crammed into a relatively small place. Even though there have been new and refurbished terminals, and thank goodness that that oppressive Terminal 2 is no longer tormenting travellers, it still feels very cramped, and there are too few seats to accommodate the number of passengers in the terminals. And there are too many shops. I sometimes get the impression that Heathrow is actually a shopping centre with an airport, rather than an airport with a good selection of shops.

What always makes me slightly annoyed is the small shop section you have to go through after arriving in Heathrow. What message does it give to travellers? Welcome (back) to Britain, now buy some booze!