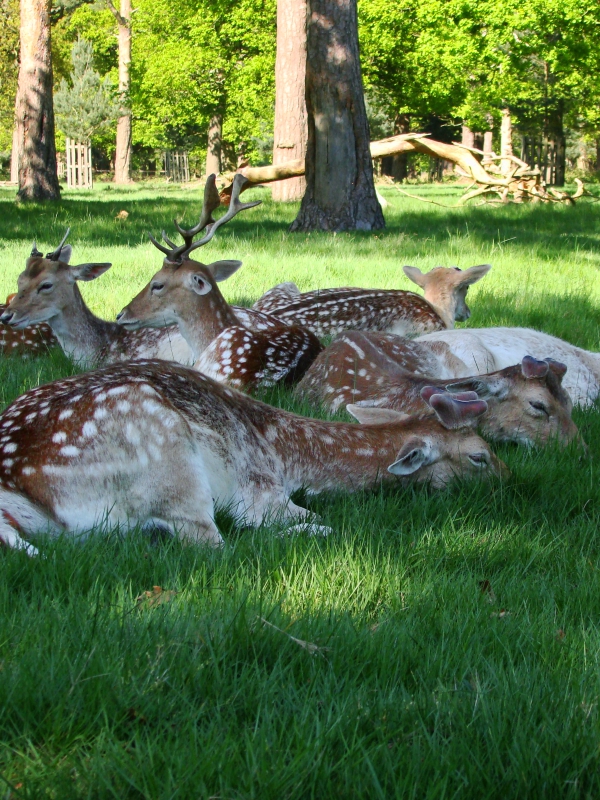 I live quite close to Wimbledon Common, and when I have enough free time and energy, and provided the weather is fine, I like to go on a long walk taking a few hours, cutting across Wimbledon Common and through Richmond Park, usually ending my walk in Richmond. For those who are familiar with Richmond Park, I enter the park through the Robin Hood Gate, and leave either through the Richmond, Petersham, or Ham Gate. Ambling about at a leisurely pace is the closest I come to exercising (which is not sufficient), and I take quite a lot of images, many of which are archived unorganized and unedited. This page links to photographs I have managed to upload: they are organized by the year and by the genre, with the newest image by date at top left.

There are many reasons to take a camera with you, when you go to Richmond Park, but for me, photographing deer has become one of the major attractions. Some of my friends think or even fear that I have become a tad obsessive about the deer. There are two species of deer in Richmond Park: red and fallow. Red deer are the largest land mammal in Britain. As the name suggests, their summer coat is reddish brown, though the winter coat has a greyer shade. Red deer stags have impressive branched antlers. Fallow deer are smaller and – as described by someone once aptly – daintier than the red deer. Fallow deer bucks have leaf-like palmated antlers. While most of the fallow deer I have seen in Richmond Park are common fallow deer with a chestnut summer coat with white dots and whose the winter coat becomes grey, there are other variations, such as the paler menil that keeps the spots all year around, the black melanistic, and the white leucistic, present in the population. The deer do not seem to mind humans and cars that much, though I would not go up too close to them, heeding the warnings in the park stating that they are wild animals and should not be approached too closely. They do sometimes react to dogs very quickly. During the rut in autumn, there are many photographers chasing the stags, as they roar, run parallel to each other, and occasionally fight.

Another place I often visit in Richmond Park is the Isabella Plantation. It is a woodland garden with streams and ponds, and probably most famous for its evergreen azaleas and rhododendrons blossoming in April and May. Bluebells too bloom in spring. There are other species of plants, so there is always something beautiful and interesting. It is a nice place to visit even in winter as camellias.

Other than the roaming deer and the Isabella Plantation, there are other attractions in the park. There are impressive buildings such as White Lodge housing the Royal Ballet Lower School and Pembroke Lodge with its tea rooms and wonderful views. There is a view of St Paul’s Cathedral from King Henry’s Mound that is protected and as such new developments cannot block it. Otherwise from various locations it is possible to have a good view of central London as well as the Wembley Stadium. There are ponds with water birds, undulating vistas, and plenty of ancient oak trees as well. For those who are interested in fungi and insects such as beetles, there are many varieties in Richmond Park.

Getting to Richmond Park

There is no train or London Underground station right next to Richmond Park, and it takes 15 to 30 minutes to reach different entrances from different stations. It may involve climbing up a hill. It takes roughly half an hour to walk from Richmond station to the Richmond Gate, but if you walk up Richmond Hill, you will enjoy a delightful view of the Thames. Richmond is a very convenient starting point as trains served by South West Trains, London Underground District line, and London Overground stop. Richmond has many restaurants, pubs, cafes, and bars, and it is a nice place to spend time, especially on the banks of the Thames. The best public transport option would be the bus. The 371 that runs between Richmond and Kingston stops at American University which is close to the Richmond Gate. The 371 and 65 (runs between Ealing Broadway and Kingston) stop at The Dysart next to the Petersham Gate. In the park itself, besides the tea rooms at Pembroke Lodge, there are other cafes and toilet facilities around the park. Consult the Royal Parks website at www.royalparks.org.uk/parks/richmond-park.