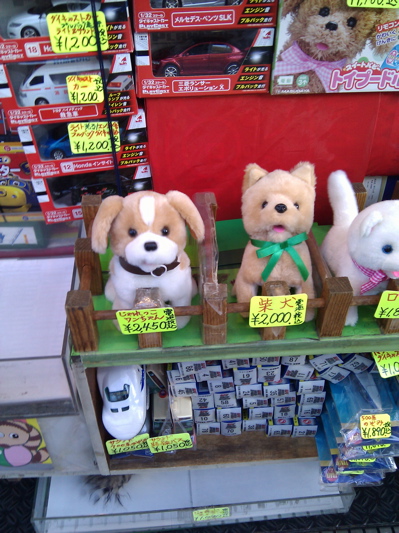 Day-time television is presumably bland in any country. In Japan, it’s striking how many ads there are for toy or robot dogs. Such items are recommended for the young and the elderly, particularly those who cannot keep pets because they live in flats and apartment blocks. Some of them are sophisticated, in that they can do various tricks, sing, talk in two dialects, and follow the owner. There are no worries about being bitten, or having to take them for a walk, or clean up after their mess. I still find it quite weird that people want something like that.

These ones in the picture are on the cheaper end, as all they seem to do was jump and yap. They were being sold in the street leading up to Sensōji (temple). Popular with tourists, I suppose it doesn’t matter what they are, as long as they sell.