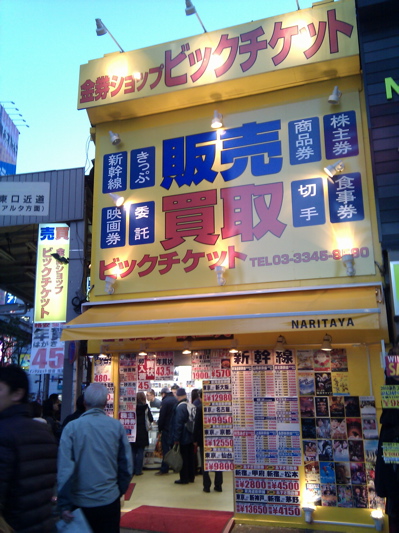 This is a photograph of a kinken shop in Shinjuku. Kinken encompasses various valuable items as gift vouchers, book tokens, store credits, train, bus and plane tickets among others, which are (de facto) transferable to another person. Japan is full of such vouchers and cards.

Some people want to cash them in instead of exchanging them for products and services, and they decide to sell these vouchers and tickets to kinken shops. The sellers do not get the full face value. Just as an example, let’s say a seller receives 7,000 yen for a book token whose face value is 10,000 yen, because he’d rather have 7,000 yen in cash than 10,000 yen in book tokens. The shops sell these vouchers at a higher price, but under the face value, and thereby making a profit. Let’s say the shop sells the 10,000 yen book voucher it bought for 7,000 yen to a customer at the price of 8,500 yen, netting 1,500 yen profit. The purchasers can then exchange the voucher for the full face value at shops or use the ticket to travel on the train, thus also benefitting from this transaction. So in the example above, the purchaser had 10,000 yen to spend on books, 1,500 yen more than otherwise.

The going purchasing and selling prices for most types of kinken indicate that margins are much smaller than the example, so it seems that while you can save a bit, it’s unlikely that you’re going to save a fortune by using kinken shops. Yet, the prices are determined largely by supply and demand, so it may be possible to grab a great deal.

It is said that unscrupulous corporations and organizations use kinken shops to launder money and create slush funds. Such companies would purchase a large number of gift vouchers, which will then be exchanged for cash at kinken shops. Such money does not have to appear on the books, and it is not easily traceable. I have no idea about accounting, but it sounds quite plausible. Disclaimer — The foregoing passage does not in any way imply that the kinken shop in picture is associated with or is part of such money laundering scheme.