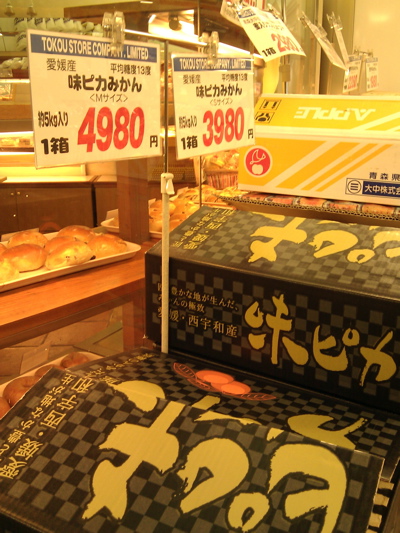 25 December is a normal working day in Japan, and as such, the supermarket nearby was open. On sale were boxes of oranges or satsumas. Satsuma is an old name for a region in Kyushu, now known as Kagoshima. In general, the large, imported oranges are called orenji and the smaller ones (‘satusmas’) grown domestically are subsumed under mikan.

The boxes in the picture above weigh 5kg each, and the medium-sized (M) mikan are priced at 4,980 yen, while the small-sized (S) mikan cost 3,980 yen. An interesting piece of information is the average sugar content of these mikan, which stands at 13%. Fruits and vegetables in Japan tend to be sweet than sour or acidic.